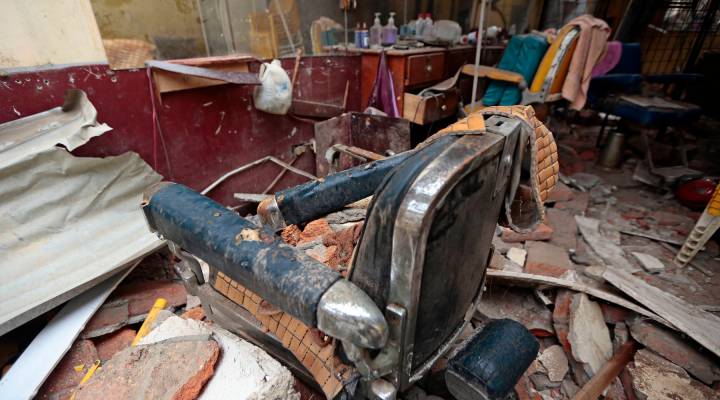 View of rubble at a hair salon after a 7.8-magnitude quake struck Portoviejo, Ecuador on Sunday. JUAN CEVALLOS/AFP/Getty Images

View of rubble at a hair salon after a 7.8-magnitude quake struck Portoviejo, Ecuador on Sunday. JUAN CEVALLOS/AFP/Getty Images

The number of people killed in a powerful earthquake that struck Ecuador over the weekend has risen to about 350, the government has said.

There have been desperate scenes as rescuers and family members searched for survivors, often with bare hands.

Teams from Switzerland, Spain and several Latin American countries have arrived to join the search effort.

More than 2,000 people were injured in the quake, Ecuador’s most powerful in decades, which hit its Pacific coast.

Earlier President Rafael Correa warned that the death toll was likely to rise, and that there were still people alive under the rubble of collapsed buildings.

President Correa visited some of the people affected by the disaster after cutting short a visit to Italy.

“I fear that figure will go up because we keep on removing rubble,” a shaken Mr Correa said in a televised address. “There are signs of life in the rubble, and that is being prioritised.”

Foreign Minister Guillaume Long praised those nations which had contributed to the rescue effort.

He tweeted (in Spanish) that as many as 120 mobile rescue teams would be on the ground by Tuesday morning.

The magnitude-7.8 quake struck on Saturday evening. Coastal areas in the north-west were closest to the epicentre.

A state of emergency has been declared and some 10,000 troops and 3,500 police have been deployed in the affected areas.

In Pedernales, close to the epicentre, as many as 400 people are feared dead. Mayor Gabriel Alcivar said the “entire town” had been flattened.

“We’re trying to do the most we can but there’s almost nothing we can do,” he added, warning that looting had broken out.

More than 600 people have been treated for injuries at tents in the town’s football stadium, with many others taken by ambulance or helicopter to regional hospitals. The stadium also served as a makeshift morgue, Reuters reported, with at least 90 bodies taken there.

Many residents of the town are due to spend Monday night sleeping outside on mattresses in muggy and tropical conditions and afraid of more aftershocks.

Firefighters throughout Monday conducted rescue operations in destroyed buildings, demanding silence so they could listen for cries for help.

Meanwhile, queues for essential supplies such as bottled water, blankets and food formed around the stadium’s walls, as residents complained that electricity shortages were preventing them from using mobile phones to contact loved ones.

“There’s nothing left of the houses and nowhere safe to stay,” resident Betty Reyna, 44, told Reuters as she camped out with members of her family.

More than 1,000 policemen are patrolling the streets of Pedernales ahead of an expected visit by the president.

In Portoviejo, a city of 300,000, 15km (10 miles) from the coast, rescuers rushed to search the debris of flattened buildings for survivors as residents reported the stench of decaying bodies beneath the rubble.

“We have already recovered three dead and we believe there are 10 to 11 people still trapped,” a rescue worker, who was digging through the debris of a six-storey hotel, told AFP news agency.

Four members of the same family were killed when a building collapsed on their car, the Associated Press reported. The Quinde family had travelled to the city, where 17-year-old daughter Sayira was due to start university next week.

Elsewhere in Portoviejo, the vibrations reduced part of the city’s prison to rubble, allowing 100 inmates to escape. Some were recaptured but others remained on the run, Justice Minister Ledy Zuniga said on Twitter.

The quake cut power supplies along the coast. With too few emergency shelters, many residents have spent two nights out in the open.

In Portoviejo, where looting was reported, about 400 residents gathered at the city’s former airport to queue for water and other supplies.

The quake is Ecuador’s largest since 1979. More than 130 aftershocks have followed.

The US Geological Survey said the earthquake struck at a fairly shallow depth of 19.2km (11.9 miles), about 27km from Muisne in a sparsely populated area.

The quake was also felt in neighbouring Colombia.

Scientists say there is no connection between the quake in Ecuador and a severe tremor in southern Japan, which also occurred on Saturday.