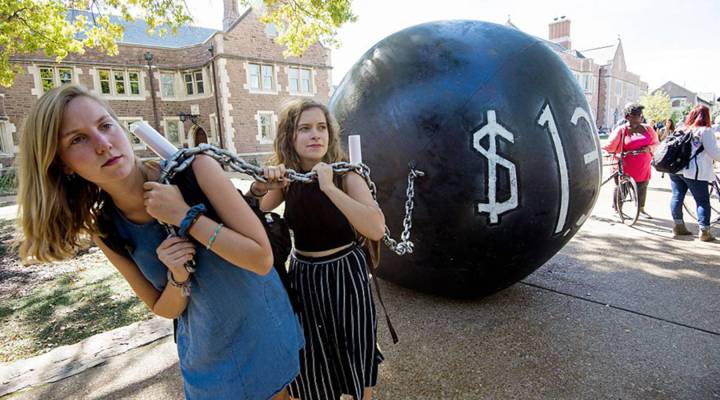 Americans owe approximately $1.5 trillion in student debt. Is there anything that can be done to help alleviate the load? Former chair of the Federal Deposit Insurance Corp. Sheila Bair joined David Brancaccio to talk about why she’s advocating for student loan repayments to be tied to a person’s income. The following is an edited transcript of their conversation.

David Brancaccio: You’re worried about something beyond mortgages, what is it?

Sheila Bair: Student debt — yes. I just don’t like unaffordable debt, period. And there is so much. It’s a huge fiscal problem too, we got one point three trillion of federal student debt now — very, very high default rates. A recent report just came out: for those who graduated in 2004, default rates will approach 40 percent. So I have been a big advocate of something called income share. It’s an approach they use in some European countries, as well as Australia.

Brancaccio: Yeah, so this notion of income sharing, how’s it work?

Bair: So it’s basically a contract. If the government did it, the student would enter into a contract with the government. The government would provide funding up to a certain common sense level for their college education. But the idea is you pay back a percentage of your income, so it’s always affordable. After a certain period of years, your obligation ends. It has nice features from an economic standpoint as well, because when you get into a downturn, people lose jobs, have their hours cut back, what have you.

Brancaccio: But they wouldn’t have to pay back as much.

Brancaccio: Where are we with this public policy proposal? It’s not just you, but it’s not front and center in Washington either, is it?

Bair: No, it’s not. It’s frustrating. So there are colleges, Purdue for instance, has launched an ISA, a couple of other liberal arts colleges, some coding schools have launched ISAs. These are being funded from private sources, and private sources are going to be looking for returns. I think it would be very helpful if philanthropy and government, particularly government, would step up and at least fund some pilots. My guess is that it’s going to be better for everybody: it’s going to be better for the student, it’s going to be better for taxpayers, it’s going to take the stress of debt off of the shoulders of the student. It’s really, the risk is almost exclusively on students now, in terms of being able to pay back that debt. There’s no skin in the game for the college, other than some accountability rules that are quite complex and primarily applied to for-profits. Getting focused on the students and having colleges share in the risk if the students do not succeed in the workforce, I think that’s an important feature of this.

Correction (April 9, 2018): An earlier version of this story misspelled Sheila Bair’s name. The text has been corrected.