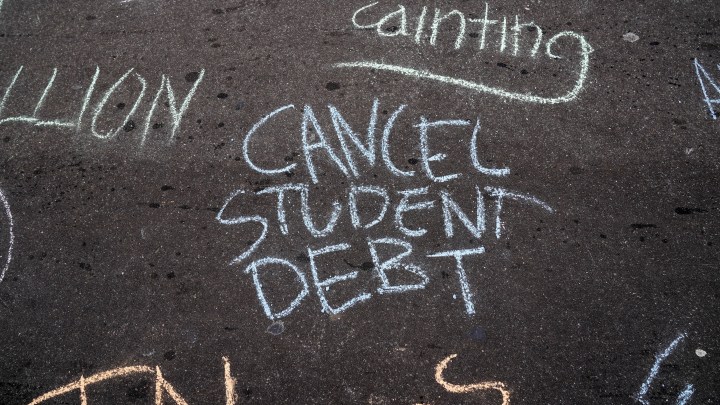 On Tuesday, the Department of Education announced its plans to change a federal student loan system, making it easier for lower-income student loan borrowers to have their debt forgiven. This announcement comes after the Biden administration extended the pause on student loan payments through August 31. This latest initiative would cancel the debt of more than 40,000 government employees and would allow for nearly 3.6 million borrowers to receive three years of credit, at minimum, toward eventual debt forgiveness.

Progressive Democrats and activists are renewing their call on the administration to cancel all student debt. More than 43 million borrowers collectively hold over $1.7 trillion in student loans, causing many to delay major financial decisions like buying a home, saving for retirement or starting a family.

The impact of student loan debt falls heavier on people of color. “Canceling student debt, which Biden can do without congressional approval, is the quickest way to narrow the racial wealth gap,” UCLA professor Hannah Appel told “Marketplace.”

Our host Amy Scott spoke to Appel, a professor of anthropology at the University of California Los Angeles and co-director of The Debt Collective, about the arguments for canceling student debt and what it would mean for the U.S. economy. The following is an edited transcript of their conversation.

Amy Scott: Why the big push to forgive student loan debt in particular, not other kinds of debt?

Hannah Appel: Actually, at The Debt Collective and the provocation of a debtors union more generally, we are organized around all kinds of household debt. We believe that — in concert with the labor movement, right — debtors, like workers, can actually exercise far more democratic control over how these things are financed. And part of what does distinguish student debt from those other kinds of debt is that it’s held 95%-plus by the federal government. Which is to say, the creditor, the regulator, the collector are all one and the same. And it happens to be a body that is, in theory, democratically responsive to us — right, in a way that a bank, for example, isn’t yet. And so I think we’ve seen the most progress and we’ve been able to build the most power around student debt, because it plainly is a policy failure for which we can hold the government accountable, and they can reverse course.

Scott: What kind of difference could this make for people who hold student debt, who are disproportionately lower-income people and people of color?

Appel: One thing that’s so important to notice about student debt: Most people that hold it — 90%-plus through the federal government — have an interest rate above 7%. Student debt has remained at or above 7% and it’s compounding interest, which is to say people who have paid hundreds of dollars, sometimes thousands of dollars, month after month after month for years, have only watched their balances grow, right? When we disaggregate student debt by race and ethnic identity, we see that it is Black women, in particular, who disproportionately hold student debt burdens. Canceling student debt, which Biden can do without congressional approval, is the quickest way to narrow the racial wealth gap. And as Ayanna Pressley said, if you want to thank Black women, cancel student debt.

Scott: I gotta ask you about the economic cost, though, I mean, you’ve mentioned the trillions of dollars in student loan debt outstanding. What does that mean for the federal budget and the deficits?

Appel: Yeah, that’s an excellent question. Millions of people, long before the pandemic, have already been in default on their loans. Which is to say, not paying them. In fact, 1 million new student debtors, long before the pandemic payment pause, would be in default on their loans. In the cost-benefit analyses internal to the Department of Education that they’ve already done, they have already acknowledged internally, long before the pandemic, that they were never going to collect on the vast majority of student loans. They are simply uncollectable. So it’s a mistake to think that this is, you know, for example, some of the counterarguments we hear: “Oh, this is going to be a burden on taxpayers.” On the contrary, taxes will not go up if this debt is canceled. But in fact, [it’s] money back in to those 45 million taxpayers, who are also student debtors, pockets — at a time, of course, when inflation is skyrocketing, people can’t afford gas and could really use some additional money in their pockets.

Scott: But I do want to ask you one more question, which I hear a lot when the conversation comes up. People like you and I — who, I just recently finished paying off my own student loan debt from grad school — I think a lot of people, either they don’t have student loan debt or they have paid it off. And so they think, “Why should we give these young people a break …” — or not all young people, I should say — “… when I did my share?” What’s your answer to that?

Appel: Yeah, that’s a really good question. I mean, the first thing I would say is there are 45 million people who still owe significant balances, right? Class inequality, race inequality, the intersection of race and class inequality in this country and certainly far beyond, are one of the most pressing problems that we all have to deal with. This isn’t just about student debt, right? This is about, what kinds of futures do we want for ourselves? What kinds of futures do we want for our neighbors? The extraordinary debts — $30,000, $40,000, 7% interest, compounding interest — that my students are leaving with today is unmatched to what folks a generation ago had to face. Again, it’s a very recent policy failure, and it’s one that can be reversed.