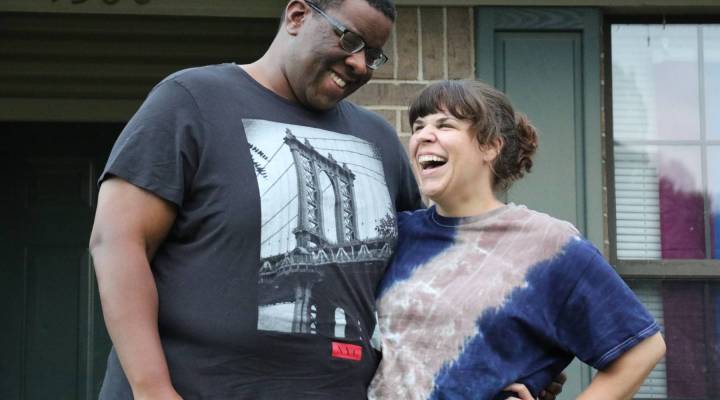 COPY
Mark and Kristen Griffin outside the home they rent in Conway, Arkansas. Sarah Whites-Koditschek/ for Marketplace

Mark and Kristen Griffin outside the home they rent in Conway, Arkansas. Sarah Whites-Koditschek/ for Marketplace
Listen Now

Mortgage backers Freddie Mac and Fannie Mae have recently changed lending rules to give more leeway to borrowers like Kristen Griffin, who have high student loans.

Griffin is a librarian at Nemo Vista High School in Center Ridge, Arkansas. She and her husband Mark are window shopping on Zillow while their 2-year-old son Fletcher sleeps nearby.

“It has a huge front porch. I am a front porch sitter,” she said while looking at a house on the site. It’s an older home with extra room for a library.

“I’m a librarian, and you don’t see any books in here do you? Because there’s no room for any books, but this would be a beautiful library,” she said.

While the Griffins would like to purchase their first home, together they have  nearly $100,000 in student loan debt, mostly from Kristen’s master’s degree in library science. Two years ago, they weren’t able to pre-qualify for a loan, but their chances may be different now.

Mortgage backers Fannie Mae and Freddie Mac have new lending rules designed to make it easier for people with student debt to qualify for a mortgage. Fannie Mae and Freddie Mac would now consider Kristen’s lower monthly student loan payments,  that she negotiated down to about $413, instead of the maximum monthly payment, when calculating  eligibility for a mortgage.

In the past, someone like Kristen, who has about $92,000 in student loans, would be considered by the bank to have a $1,000 monthly payment due on that amount, based on  roughly one percent of the loan. This was meant to shield lenders in the event that a borrower might lose a job or stop participating in an income-based repayment plan.

According to federal data, 21 percent of Arkansas loan borrowers are on income-based repayment plans. Bill Worthington is a loan officer for the Bank of Little Rock. He’s seen a lot of people carrying student debt come through his doors, and he said most of them are on income-based plans. “The debt is so high. I mean, they just can’t get a loan,” he said.

In fact, a recent survey by the National Association of Realtors and the group American Student Assistance shows about three-quarters of graduates said student loans are the reason they keep renting. But the new rules could make a difference in people’s ability to borrow.

Since the changes, Worthington has approved several borrowers who couldn’t have gotten loans before. “I think it is a good thing now because it is allowing people to get into homes that normally wouldn’t, that would have to keep renting for a while,” Worthington said.

While these changes only apply to conventional mortgage lending, he expects government-backed Fair Housing Administration loans to follow.

Betsy Mayotte works for the Center for Consumer Advocacy at American Student Assistance. She said part of the challenge is it’s taking people longer to pay off student loans than it used to, and borrowers are getting older.

“Over half of all student loan borrowers are over 30 and a third of them are over 40, so student loan debt is not a young person’s problem anymore.”

Griffin, the 36-year-old school librarian, said she sees that in her own family. “When my parents were 35 years old, they were probably on their third home by then,” she said.

Her husband Mark is a 29-year-old network analyst. He wants to get a home because he hopes his family will start building equity. Griffin didn’t finish his bachelor’s degree and has struggled with his student loan debt since dropping out. He recently got a better paying job and expects it will change their prospects for buying.

“It’s definitely, at least to me personally, a sign of becoming a responsible adult, and moving on to that next level, that next chapter in your life, where you have major ownership of something,” he said.

But Mayotte cautions that for some consumers, adding a long-term mortgage onto student debt isn’t the best idea, though every situation is different.

While the Griffins have started looking at possible dream homes, they’re still saving for a down payment.