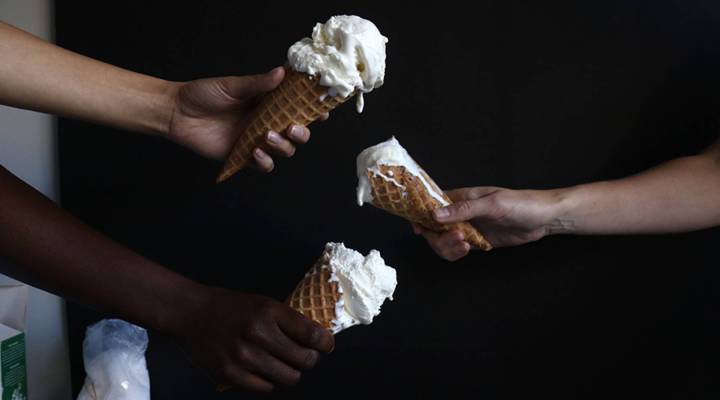 COPY
Behind the scenes at an advertising space at 72andSunny. Courtesy of 72andSunny

Behind the scenes at an advertising space at 72andSunny. Courtesy of 72andSunny
Listen Now

Tillamook, an Oregon-based dairy company, has been around since 1909, and the farmer-owned business cooperative with a history of making cheese bought its first national ad back in 1917. Tillamook’s first newspaper and magazine ads published in 1918. And in 2011 they aired their first commercial.

Over time, Tillamook ads evolved to reflect changes in the culture of the U.S. There was the “Man’s Salad” ad from the early ’20s. This Great Depression era ad promised a “rich and economical food” that could stave off illness. In 1942, Tillamook tapped into a wartime mentality with an ad featuring plane mechanics that ran in Sunset magazine alongside suggested recipes.

These days, you’ll see Tillamook making ice cream explode on Instagram  and tweeting out memes about Greek yogurt. Their black, white and yellow color palate is still around, but it looks a lot cooler.

TILLAMOOK – SHREDS from PEDEN+MUNK on Vimeo.

So how does a brand with a century of history adapt its marketing strategy? Gui Borchert is the group creative director for Tillamook’s advertising at the LA-based agency 72andSunny. Borchert says that even though advertising is changing, his job is the same. “You’re still communicating something to a group of people,” Borchert said, “for an older company … it’s actually great, because now … your message can really live in so many places.”

Borchert says that the standard practice for advertising in the past was simple. A client would come to an ad team with a product, and they’d make one film (a commercial) and one poster. Now, even the TV ad space that used to be a first option is shrinking. “There’s so much more to respond to, so much more to compete with,” Borchert said, “try to be a brand, squeezing in between all of that.”

When he and his team begin working on a new ad, Borchert asks himself this question: “Where should this live?” The answer could be anything from a billboard to a social post to a short documentary posted to YouTube. For Tillamook, TV ads are usually saved for special occasions. The company’s 2016 Oscars spot paid off — the ad brought in 10 million media impressions and sparked a 450 percent increase in mentions of Tillamook on social media in the 48 hours following the ad’s launch.

With more potential platforms and more engaged customers comes another new hurdle: the quality of an ad needs to be high caliber to pass muster.

JC Abbruzzi, creative director on the Tillamook team for 72andSunny, says that social space can level the playing field for brands competing for attention, but that a big budget still goes a long way.

“When they [Tillamook] go up against the bigger conglomerates in the industry who can outspend them media-wise, they just have to be smarter, they have to be more nimble,” Abbruzzi said, “as culture and as communication has evolved, it gives them the ability to reach a wider audience, to be a bit more one-on-one with them.”

Ads of the past delivered a message, but posting a video ad on a social platform, even if it’s short, might result in a scroll-by. “What you would try to do more in social is engage your community a bit more, get them to interact, and over time they’re going to be looking for stuff from you, or they’ll at least be willing to watch stuff from you,” Abbruzzi said, “I think that’s what Tillamook really aims for in that space is to engage and try to tell a deeper story.”

For the team at 72andSunny, that means a lot of conversation on social media and a speedy, reactive strategy. Tillamook will encourage followers to post 4 a.m. selfies or retweet empty plates to raise money for people going hungry. They dedicated an entire room to quick turnaround ads.

“We have a little maker room, a space where the creative teams can sit, and they have all the materials they need, from all the food and all the cheese and all the ice cream, but also all the equipment,” Borchert said, “it’s not a gigantic photo studio with super expensive equipment. It’s enough to be able to do things really well crafted, but what it allows us to do is we shrunk down on all the layers of approval and things that slowed down the process.”

The maker room is full of mason jars, wood planks, pots, pans and utensils — a fridge across the hall holds an enormous amount of ice cream and cheese. Borchert, Abbruzzi and their team make a lot of their Instagram ads in this space and churn content out quickly.

“It’s really high energy, super fun. You walk in there, there’s stuff everywhere, and the teams are just creating and making things,” Borchert said. “The energy of that room is something that never could have never existed before. But I think with the speed of technology and the rate the culture is moving in now, it’s not that you can now do this … you can’t afford not to.”

Correction (Apr. 2, 2018): An earlier version of this story misspelled JC Abbruzzi’s name. The text has been corrected.