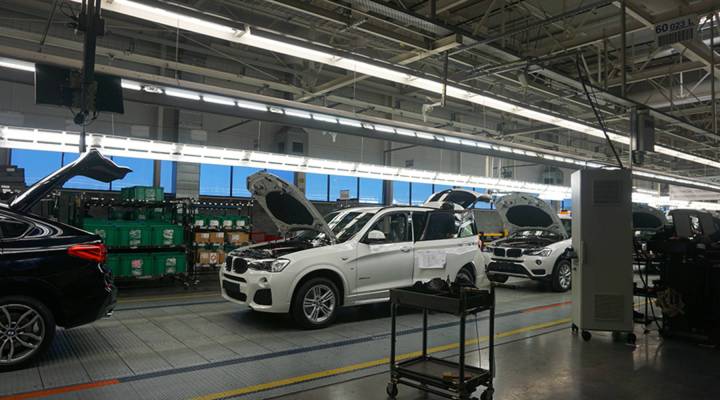 President Donald Trump signed steel and aluminum tariffs yesterday, raising the threat of a global trade war. That has implications for places where the local economy is an active participant in the global economy. Spartanburg County, South Carolina, is home of the only BMW manufacturing facility in the United States, and about 70 percent of the vehicles built there are made for customers living outside the U.S. Last year, Marketplace’s Kai Ryssdal visited the BMW facility and spoke with Spartanburg County Councilman David Britt about globalization. Today, he checked in with Britt for his reaction to Trump’s tariff decisions. The following is an edited transcript of their conversation.

Kai Ryssdal: So what’s going through your mind right now, sir, as these tariffs now are a thing?

Britt: Well, I was hoping and praying that this was not going to come to pass. I’m very concerned. My stomach is churning and my mind is swirling.

Ryssdal: When we were down there last year in Spartanburg, going out to the BMW plant and all of that, you and I sat down, we had a long chat about how it came to pass and how it took years for you to get that BMW plant. How worried are you now with these tariffs and the threat of retaliation from the European Union and Germany? How worried are you that things might go south a little bit?

Britt: Well, I’m very concerned, I mean, not only for the best manufacturing company I’ve ever worked with, BMW, not only concern for them. And we’ve got over 40 suppliers to them in Spartanburg and the neighboring counties with probably 34,000 people employed just supporting BMW. But we have 125 international companies here in Spartanburg. I’m concerned for them, mainly their employees and their customers that they provide product to. This can have a devastating effect across the board because it is going to have a major effect, you know, here in Spartanburg County in South Carolina.

Ryssdal: When I was down there a number of months ago, you said to me when I asked you about the president and his trade policies — because there was, you know, we all kind of knew that this was coming based on his statements during the campaign — you said you think the president lacks understanding and you were hoping that he would come down to South Carolina and talk to y’all and the folks who work at BMW in some of those industries. Do you think you can still help the president understand globalization or has that ship sailed?

Britt: No. I mean, again my invitation is wide open to the president. I would love for both the president and his team to come down here and let us show him we have companies, like I say, from the Pacific Rim to Canada, Mexico and all points in between that have come here to manufacture and build their businesses. And this is one of the things that concerns me greatly. You know, with the president’s actions in the last year, we have seen an explosion of international companies wanting to come here. I mean, it’s been unbelievable. They can’t get their businesses built quick enough.

Ryssdal: And you’re saying, wait, just just to be clear, sir, you’re saying that’s because the president has done things like changing regulations in the tax law and all that jazz and it’s made it more attractive now for companies to come to your part of the country.

Britt: No doubt about it. I mean, the proof’s in the pudding. Those policies have worked. But now all of a sudden —

Ryssdal: Well, let me put it a little more plainly: Is he shooting himself in the foot here do you think?

Britt: I don’t think he’s shooting himself, I think he’s shooting the American taxpayer and citizen and employee in the foot. And that’s the biggest concern. This action could have devastating effects across the board. It could actually kill these great opportunities that we’re having right now. And like I say, I have no problem with people who don’t trade with us fairly, deal with them. I said it last year. Mr. President, you deal with the countries, let us deal with the companies, and be careful how you deal with these companies because you can put your foot on the throat of growth, and that’s not good for anybody.