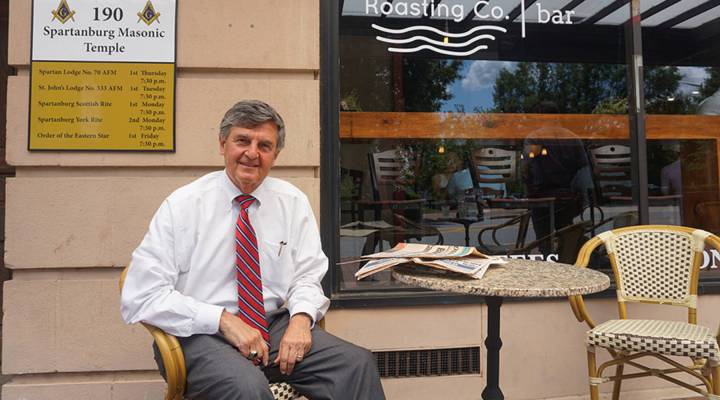 COPY
Spartanburg County Councilman David Britt is one of the people who initially convinced BMW to open a factory. Bridget Bodnar/Marketplace
Trade showdown

Spartanburg County Councilman David Britt is one of the people who initially convinced BMW to open a factory. Bridget Bodnar/Marketplace
Listen Now

Twenty-five years ago, South Carolina’s governor and the Spartanburg County Council lobbied hard to bring foreign automakers into the state. Now 579,300 South Carolina jobs are supported by global trade, according to a U.S. Chamber of Commerce report. That puts South Carolina in a difficult position as trade tensions disrupt global supply chains.

The Charleston Post and Courier reported this week that Volvo, which has a huge plant in Berkeley County is thinking about moving production to China, and BMW, which has an even bigger plant in Spartanburg County, says retaliatory Chinese tariffs are going to cost it $347 million this year and more than half a billion the next. Marketplace’s Kai Ryssdal visited that BMW facility last year and spoke with Spartanburg County Councilman David Britt, who is one of the people who convinced BMW to open a factory there in the first place. Tuesday, Ryssdal checked in with Britt to see how things are going in Spartanburg seven months after the president formally ordered tariffs on steel and aluminum.

Kai Ryssdal: So listen, this isn’t exactly fair, but I’m going to play you back to yourself from the last time you and I spoke. We got you on the phone, and I said, “How you worrying about these tariffs? What are you thinking?” And here’s what you said:

“This action could have devastating effects across the board. It could actually kill these great opportunities we’re having right now.”

Ryssdal: So here we are a number of months later. It looks like it’s kind of coming true.

Britt: That’s exactly right. Unfortunately, I wish I were wrong. But what is happening is, you know, the tariffs that the president is imposing is putting the foot on the throat of growth that we’ve had not only in Spartanburg, but in South Carolina. And I see it going across the country as well.

Ryssdal: You’re the guy — well, one of the guys, anyway — who helped bring that original BMW plant to Spartanburg. How do you feel now that you see all this going on?

Britt: It’s putting everything that we’ve worked for for 26 years in jeopardy. We said it, yeah, I’ve said it in Washington, and thanks to you, Kai, and your Marketplace show. That’s the reason Sen. Orrin Hatch invited me to come and testify. I asked him, “How did you find me?” And they said, “We heard you on Marketplace with Kai.” But yeah, this is the most serious thing that we have going on in the United States.

Ryssdal: Can you feel it around town?

Britt: All I have to do is walk down the street. I thought people would be a little upset with me, especially being in such a red state. And I’m a Republican. I mean, I voted for Trump two years ago. I thought some folks would say, “David what’s going on?” But the people in Spartanburg and South Carolina are saying, “Thank you for going to Washington. What else do we need to do?” You know, we’ve never won a trade war. I mean, we’ve stated this a lot since you and I first started talking about this. I mean, since the 1850s, we do not win trade wars. We never have. And the people who actually lose in this whole process are the American citizens, whether you’re in Spartanburg, South Carolina, or in the United States. It’s not China — they’re not paying anything in tariffs. It’s the United States citizen. Look at me, at what I’m wearing — oh, you can’t see me since you’re on the radio — I’m wearing a Seiko watch made in Japan. I’m wearing a shirt that was made in India. My suit was made in Egypt. My shoes were made in Italy. I’m a walking billboard for international trade.

Ryssdal: Do you suppose, sir, that there is an end in sight? I mean, the president doesn’t look like he’s backing down, the Chinese certainly aren’t.

Britt: All those countries that are doing business here in Spartanburg? I’ve made friends with a lot of those folks. I’ve been in every deal other than Michelin in 1978 when they first came. These countries, and these partners that we’ve developed here in Spartanburg, they’re worried about what’s happening. I am hoping and praying that the president will come to a different opinion about the tariffs. These relationships that we build here in Spartanburg in South Carolina, they’re done with a handshake, not a hammer.