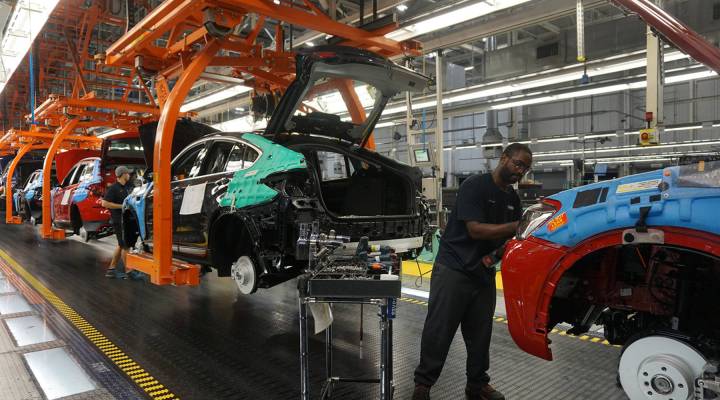 COPY
Inside Assembly North at BMW's Spartanburg manufacturing facility, the biggest BMW factory in the world. Bridget Bodnar/Marketplace
Trade Off: Stories of Globalization and Backlash

Twenty-five years ago, South Carolina made a bet on luxury German cars that’s put them smack dab in the middle of the global economy. At the time, the area was desperate to find something to replace the textile mill jobs that had left for overseas. Today, that choice puts South Carolina in a difficult position under President Trump who wants to pull the U.S. back from the global economy.

Back in the early 1990s, South Carolina’s governor lobbied hard to convince BMW to build their only American manufacturing facility in Upstate South Carolina. The state beat out Nebraska and BMW eventually settled on a piece of property in Spartanburg County.

BMW’s arrival brought thousands of jobs, both direct and indirect, and billions of dollars in corporate investment to the area. Today, that Upstate South Carolina facility is BMW’s biggest manufacturing facility in the world. About 70 percent of the vehicles built there are made for customers living outside the U.S.

All that makes Upstate South Carolina an example of what globalization is supposed to look like when it works. Its effects can be seen across the state, like in Charleston, at the Port of Charleston where those BMWs destined for overseas market make their last stop before being driven onto a waiting cargo ship.

Record volumes moved through the port last year, and that’s in part thanks to BMW. Jim Newsome is the CEO of the Port of Charleston and to him, globalization just makes the most sense. “People in countries should focus on what they do best. That’s the David Ricardo theory, everyone shouldn’t try to do everything.”

Jim Newsome is the CEO of the Port of Charleston. He understands that not everyone has personally seen the benefits of globalization but believes that on balance, it’s a good thing.

David Ricardo, one of the founders of modern economics, came up with the idea of comparative advantages. Everybody makes what they’re best at or can make the most efficiently and then trades with other countries for the rest. A common refrain from supporters of this theory is that globalization is the “tide that lifts all boats” – a phrase Newsome also uses.

But today, it’s clear that while globalization may create prosperity in general, not everyone will experience that prosperity.

“If you happen to be in an industry that’s not thriving through globalization and you have the unfortunate circumstance of losing your job from that then I think you would see globalization as a bad thing” says Newsome.

But if you take the three and a half hour drive from the port in Charleston to the BMW manufacturing site in Spartanburg County, you will see how the area’s decision 25 years ago to double down on globalization has paid off for them.

Sherry McCraw is the plant’s CFO but back when she was hired as employee number 39, she was an engineer – a textile engineer, in fact. Her job was to make the dwindling American mills more efficient and therefore more competitive.

Sherry Kuntz McCraw, the Chief Financial Officer at BMW’s Spartanburg facility. She started working for BMW as an engineer and was their 39th hire.

“I would drive past on Highway 85 and I would see the billboard that came up in the middle of a peach orchard,” she remembers. “It said: ‘The future home of BMW manufacturing.’ And I looked at the sign everyday as I would pass by and I would think, that’s really cool, I could travel to Germany, I could get European travel, and I could do engineering and work for a cool company.”

McCraw has since overseen the Spartanburg facility’s expansion into BMW’s largest manufacturing facility in the world, including a spotlessly clean and bustling assembly plant that BMW built during the recession.

“We started the plant pretty small and then we were able to build this assembly, another paint shop, additional body shops” she said. There are 5,000 people working in this one assembly hall now.

McCraw is keenly aware of BMW and Spartanburg’s role in the global economy, building cars for the rest of the world and creating jobs and prosperity for the people around her. When she hears the calls from politicians to close down borders and limit trade, she says “It’s so difficult to understand that perspective, I’m not really sure where they’re coming from. You see all the benefits from being able to sell everywhere and be able to buy from everyplace. For me it’s just a difficult discussion.”

But it’s a discussion President Trump wants to have. Pulling back from the global economy is one of the few economic policies his administration has made progress on.

Brett Suits is another employee at BMW. Suits is employee number 50 and has seen his and his family’s life shaped through his job of the last two decades. He and his wife, Allison, have three children and a boisterous dog named Bella.

Brett’s worked his way up the ranks at BMW and is now a manager. Brett’s son, Jacob, is also an employee at BMW – an engineer and employee number 9,593. Brett and Allison’s daughter Mollie teaches special education.

Allison studied and taught German well before BMW came to Spartanburg. She and Brett jumped at the chance to work for BMW in Germany for three years before coming back to South Carolina. The family traveled extensively and everyone came back able to speak German.

Brett’s job has created a good life for his family. Jacob acknowledges he and his sister can’t really think about life without BMW.

“My dad’s always had a brand new BMW,” he said. “It’s a privilege but I didn’t realize that until I got in the real world and then it was like oh, not everyone has a brand new BMW all the time.”

And Mollie too sees the effect that a parent’s job at BMW can have in the lives of her students. “They can have health care, they have better support at home and then my students are going to be more successful because of that.”

If Brett had his way, BMW and Spartanburg’s role in the global economy would continue long after he retires. He’s thinking about the next generation of leadership that’ll take over after him. “It’s for the community. This is something that isn’t a one or two generation wonder. We intend to make this long-term” he says. “We need to make sure that that group is prepared to take over the organization and lead it to better things than even we’ve been able to.”

Globalization hasn’t worked like this in all parts of the U.S., but untangling it will be complicated and it seems unlikely that global trade will go away anytime soon. When asked if he makes German cars or American cars, Jacob said “We make German cars, in America.”