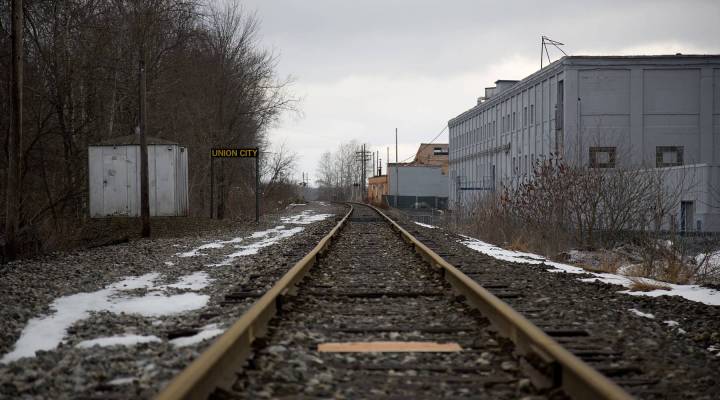 Union City, Pennsylvania — population 3,300, is located in the rural outskirts of Erie. Marketplace
The Big Promise

Union City, Pennsylvania — population 3,300, is located in the rural outskirts of Erie. Marketplace

Last year, we spent a lot of time in Erie County, Penn. Union City is on the outskirts of Erie. The small, rural town was once known as the “chair capital of the world,” because manufacturers like Ethan Allen made furniture there. But when Ethan Allen and other companies left, Union City changed. Marketplace host Kai Ryssdal visited Union City to see how locals there are feeling about their economies after Trump’s first year in office. At Ma-Donna’s Restaurant, a local gathering spot, Ryssdal talked with Robert Blakeslee, Bob Mitchell, Norm Troyer, and Mery Troyer over breakfast. The following is an edited transcript of their conversation.

Kai Ryssdal: Talk to me, sir, about the lumber business.

Robert Blakeslee: Business has really come up in the last year, tremendously. In the last 10 years, we’ve only had two good years before this last year, but it is looking good and it looks like it’s going to be even better next year.

Ryssdal: The folks who work for you – since business is going so well for you, you’re going to give them raises?

Blakeslee: I already have.

Ryssdal: You already have?

Ryssdal: How much more do they get?

Ryssdal: Mr. Troyer, let me ask you something. So I’ll tell you what, every time we come here and we have you on, people write in to Marketplace and they say, “Oh, those Troyers, they own half the damn town out there, they’ve got more money than they know what to do with.” So, you’re doing pretty well for this neck of the woods, yeah?

Merv Troyer: We’ve done well. We have no complaints about this country. I love this country. And I love the guy that’s running the country. I have a few disagreements with him, but I like what he’s doing. He’s gotten rid of a lot of regulations, and that’s helping my business. And I’m very happy about that.

Ryssdal: What about the rest of the country, though, Mr. Troyer? Folks who maybe aren’t doing as well as you are.

Ryssdal: I mean all you have to do is drive up and down Route 8 and see folks that aren’t doing so well.

Merv Troyer: That’s been that way for a long time. And it’s just getting better, I think. I really do. I think that people are going to be getting an increase in their paychecks here, and they’re going to be paying less taxes. I think it’s going to be nothing but better.

Ryssdal: Mr. Blakeslee, you’re a small business man, I guess you’d say, right? Do you believe this tax bill was geared for you, or was it geared for the big giant companies out there?

Blakeslee: You know, for the last administration the business guy was the evil guy, the greedy evil guy. And it looks to me from what happened that they were basically pressed down, so that it was very hard to make money. If the big guy isn’t making money, how can he hire? How can he pass it on? The people in this town here, this is sort of a bedroom community. A lot of people work in Erie. You know, G.E. going basically bad has really hurt this community. So, I believe that the big guy has to succeed in order to help us little guys. You know, we can’t all work for the government. Someone’s got to be making money.

Ryssdal: Mr. Mitchell, tell me about the tax law and regulations. Oil and gas is a pretty heavily regulated industry.

Bob Mitchell: Yes, it is. And there is a lot of tax breaks for the investor in the gas and oil business, which moves money. Puts it into circulation, is what I’m trying to say. And it’s like Rob said, Blaskelee here, he increased that $20 [per] thousand. And that’s a pretty good increase. It’s a very good increase. And it’s because of this tax bill that Trump put in. I think I understand what he’s talking about. You know, everybody says it’s not for the little guy, it’s for the big guy. But when the big guy can, you know, get ahead a little bit, he can hire more people.

Ryssdal: So, you believe in trickle-down economics?

Mitchell: Yes, I do.

Norm Troyer: I have a variety of – I do brokerage and that’s been holding in there. I also own apartment complexes, and they’re 90 percent occupied, was 100 percent, but give winter time to get a little moving in and out.

Norm Troyer: It’s OK. We don’t get the high-end rental amounts here, and here we’re getting killed with real estate tax increases. So those are huge problems.

Ryssdal: How are we going to pay for schools and roads and bridges and infrastructure if folks don’t want to pay taxes?

Norm Troyer: There are other ways to raise revenue. I’m not saying there shouldn’t be some real estate taxes, but I’m saying now it’s becoming disproportionate. You know, I’m not a kid. I’m still working. I’m 82 years old, sir. Most of the people in other little candy things retired at 60. There’s a difference.

Blakeslee: Except for one thing: We work our tails off.

Ryssdal: I understand that, and that’s what I said: You all are working, but you’re doing all right.

Blakeslee: Then you have someone who isn’t working, doesn’t want to work, and we’re always on the pay end. We’re never receiving, what are we receiving? We’re always paying out.

Ryssdal: Well, so that gets the question. Y’all seem a little, I don’t want to say angry, but irritated. But you got Mr. Trump in the White House doing what you want him to do, yet you’re still irritated… because it hasn’t changed enough? Is that where we are?

Norm Troyer: The man has been in office for one year. The economy has rebounded. We’ve had a lot of improvement. Everybody expects a miracle in one year. There have been a lot of regulations that have already been slashed. Get rid of regulations. Cut the thing down. Cut the cost down. Give the man a chance. It’s just like, we’re in the first quarter of a four-quarter ball game. I don’t know if you’ve been watching the football teams, but it’s pretty hard to think that you know how the whole game is going to turn out if you’re only watching the first quarter.