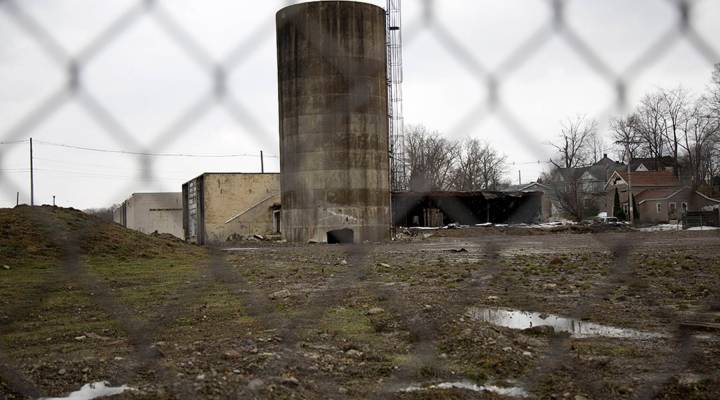 COPY
A retired factory in Erie County, PA. Maitham Basha-Agha/Marketplace
How The Deck Is Stacked

Editor’s Note: This interview was conducted during our a live show broadcast  from Erie, Pennsylvania. Erie is at the center of our year-long reporting project, “The Big Promise.”

When a city loses jobs the way Erie has, you have a workforce without enough work. That sounds like a simple formula but it brings a lot of problems.

“We are struggling, we’re trying to remake ourselves,” said Janet Anderson, with the Pennsylvania Workforce Investment Board. “We are looking at ways to retrain some of the workforce but our workforce, in many cases, is older. So do you retrain them, or do you bring in new manufacturing jobs to sustain those individuals until retirement?”

GE has been the biggest employer in this town for years. But trade deals and shifting needs have meant GE and other companies here have gotten rid of “family-sustaining jobs” with high pay and good benefits, said GE welder Scott Slawson. He’s president of Local 506 of the United Electrical, Radio and Machine Workers of America, and was born and raised in Erie.

“This is a great town. I love it here,” he said. “I got a huge body of fresh water out there, the worst thing we’ve got to worry about around here is big snowstorms.”

For union workers, sticking around means going through retraining programs for workers laid off due to free trade agreements. They need additional math and other new skills to work in high-tech manufacturing. That’s a process, Anderson said.

“You know sometimes you have to have the floor fall out to pick yourself up,” she said. “I wouldn’t say we are there. What I would say is that we are at a place where opportunity really is out there for us. So we’re looking at marketing this work force, we’re not looking at sending them away.”

Of course, this dynamic is a lot of what Donald Trump spent his campaign railing against. He’s promised to make new, better deals and impose stiff tariffs for countries that won’t parlay. But Slawson said he’s not sure he wants the president-elect ripping up trade agreements. He worries about what a trade war will do to consumer goods and the economy writ-large.

“I’m not looking for anything,” from Trump, he said. “We’re doing it ourselves. We were doing it before he came along, and we’ll be doing it after he’s gone.”