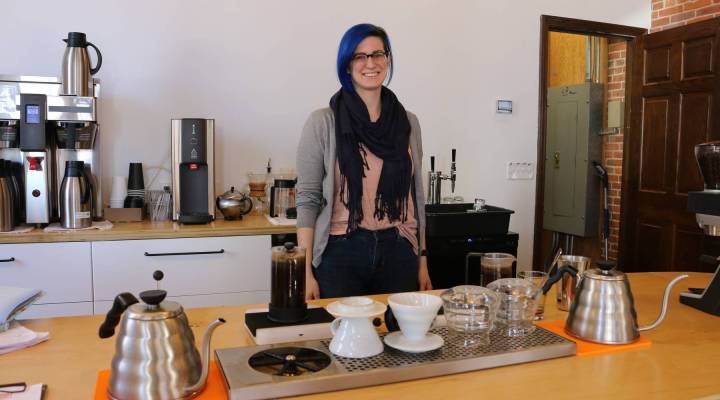 COPY
After settling in Erie, Hannah Kirby sees the city differently than many of her neighbors: She sees a lot of potential. Daisy Palacios/Marketplace
The Big Promise

After settling in Erie, Hannah Kirby sees the city differently than many of her neighbors: She sees a lot of potential. Daisy Palacios/Marketplace
Listen Now

Hannah Kirby is a 30-year-old resident of Erie, Pennsylvania, originally from Waynesburg. She first came to Erie to earn her engineering degree from Gannon University and later got an MBA. She got a job as an engineer at a manufacturing company in town, but eventually realized she wanted something else: to open up a coffee shop. She studied coffee, visited roasters across the country, and now Kirby owns Ember + Forge in downtown Erie, the only coffee shop within the city limits besides Starbucks. The following is an edited transcript of Kirby discussing how the coffee shop came to be and how she hopes it will contribute to Erie’s growth.

So I came to Erie in 2006 to go to Gannon University here in downtown Erie. I really fell in love with the people that were here, really just decided that this is where I want to stay. I bought a house right out of college here inside the city limits. And it’s kind of been my thing to support this city and help it grow and develop. So when I chose it as my home, it just made sense for me to build the business here in Erie.

So this building was built in 1851 and it originally was a chandlery [a candlemaker]. And so the chandlery idea is where it kind of came up with the “ember,” so candles and that kind of flame-fire aspect. And then the “forge” part of it comes from Erie’s history as a manufacturing town. And then when we started looking a little bit deeper, we thought about what an ember was. It’s the remnants of a once blazing fire, and we thought that was just so appropriate for where Erie is. We have lost a lot of jobs and people see it as kind of a declining city, but really, you know, I see it as that heart of a fire that really can be turned into flames so easily.

You know, a lot of people say Erie has a lot of potential, and it most certainly does, but saying that it has potential [implies] it’s not totally living up to it. And I think that Erie already is doing a lot. Growth is certainly welcomed, but I think that we have a lot to offer. You know, the younger generation, I feel like we don’t expect to have those jobs that an older generation had. They have never existed for us — so where you come out of high school and work in a manufacturing job, and that is a wage you’re able to raise a family on. We’ve never had that opportunity. So we realize that we have to make those jobs that are family-sustaining, life-sustaining.

I think that people are starting to realize — the younger generation, specifically — that we’re not going to be able to turn to our federal government, we’re not going to be able to turn to our state government to build cities and that the cities are going to have to do that themselves. So it’s really becoming more obvious that this is a growing city. I hope that we can just be here for a long time. And what would make this dream absolutely set in stone would be that two people come in and talk about an idea and come up with a plan inside these walls and then execute it outside of them that really helps our city grow. That would be kind of the ultimate dream.

Correction (Feb. 23, 2018): An earlier version of this story misstated the year the building was built. The text has been corrected.