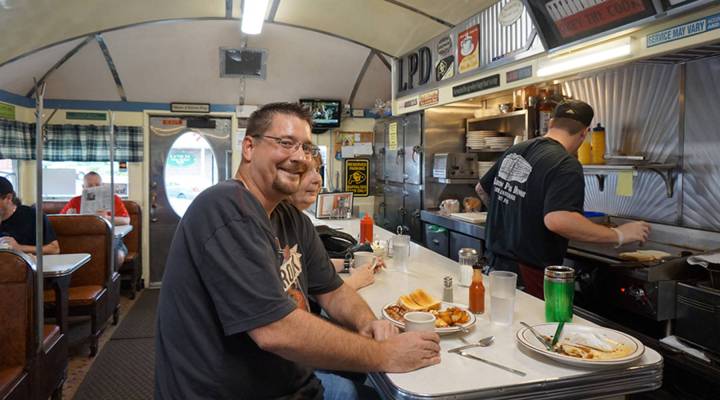 COPY
Jim Connelly, a former GE engineer, hopes to go back to school and start his own business. He sits at the Lawrence Park Dinor, just up the street from the 350-acre GE plant. Erika Beras/Marketplace

Jim Connelly, a former GE engineer, hopes to go back to school and start his own business. He sits at the Lawrence Park Dinor, just up the street from the 350-acre GE plant. Erika Beras/Marketplace
Listen Now

You can’t live in Lawrence Park, Pennsylvania, and not know General Electric. The company designed and built the entire community — the street grid, the houses — over a century ago.

Jim Connelly spent his childhood in the shadow of GE’s 350-acre facility near Erie. And eight years ago, after college and the military, he came home to Lawrence Park and joined the ranks.

“I really admired that factory when I was growing up, wondering what they did inside the fence,” he said.

What they did was manufacture locomotives. Connelly’s father worked on the factory floor. Most of Connelly’s high school buddies worked there, too. Then, a few years ago, the locomotive market started to falter and the layoffs began. Last summer, the 40-year-old engineer was let go. He understood.

“If you pay a guy like me a hundred thousand dollars a year … or you could pay the same person with the same credentials overseas $12 an hour … it just makes sense,” he said.

But Connelly’s job didn’t necessarily go overseas. He’s pretty sure it went to Texas. Five years ago, GE opened a locomotive plant in Fort Worth, where workers aren’t unionized and earn less than workers in Lawrence Park. GE prefers to call these job moves, where positions may also be renamed,  “transfers of work.”

“It’s all about how do we reduce cost,” said Jamie Miller, GE’s chief financial officer. “How do we increase efficiency? How do we preserve U.S. jobs as we do it?” she said.

Rust Belt manufacturing jobs in steel and paper mills have been moving south for years. It’s often the last stop before they cross the border. People like Greg LeRoy with Good Jobs First refer to it as “the second war among the states.”

“I can’t think of a president who has ever blessed the war among the states like Trump did,” he said, referring to a speech Trump made at the Carrier factory in Indiana last year.

Five years ago, more than 5,000 people worked at GE in Lawrence Park. Now fewer than 2,000 have jobs there.

A mural at the Lawrence Park campus.

“You could walk over and even get a job as a floor sweeper and you had a pretty decent wage,” said Marjorie McLean, who’s has had a front-row seat for the unraveling. Her late husband worked at GE, and so did her father-in-law, two of her kids, a son-in-law and a grandson. Until she retired as a high school guidance counselor in 1989, she’d send grads there year after year. McLean, 91, even got married in a GE building. Now she’s working to preserve this company town by having it registered as a historic place. She said even after years of job losses, the memories of workers moving through the factory gates still feel fresh.

“I think we accepted it at face value that the company would always be here. We never thought that they would leave,” she said.

In fact, GE hasn’t left entirely. Many of the jobs that remain at the facility are high tech. Tasks don’t require as many workers as in the old days. Alan Hamilton, a third-generation employee, shows off GE’s advanced manufacturing facilities. Last November at an investor meeting, GE announced plans to exit the locomotive manufacturing industry within the next couple years. But despite all the changes, “I’m very confident we’ll be here many, many more years,” he said.

For Connelly, losing his job was somewhat of a relief.

“I was able to survive three or four different layoffs, and it was really causing anxiety between should I stay with GE? Is this company growing? Do I have a future? Can I plan to retire?” he said.

He plans to go back to school for a master’s degree and wants to start his own business.