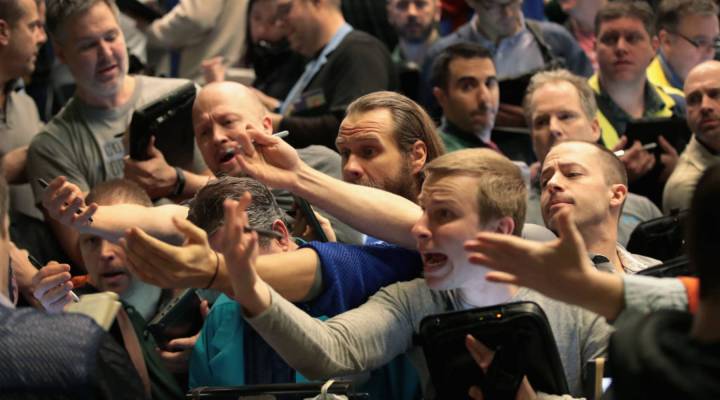 After a period of record highs, the stock market fell by 10 percent this week, in what is known as a correction.

How does this translate into the real world? People are taking out billions (cumulatively) from exchange-traded funds that track certain stock market indices. But conventional wisdom says you should hold tight to your funds — stick to the long-term investment plan you have and don’t react emotionally to the markets’ highs or lows.

Jason Zweig, investing columnist for The Wall Street Journal and author of the book “The Devil’s Financial Dictionary,” joined us to discuss whether investors are making bad moves, along with some of the terminology surrounding these stock dips. Below is an edited transcript.

David Brancaccio: So I was looking — there’s an exchange-traded fund, a really big one, that tracks the S&P 500. And people apparently took about $20 billion out of that over the last four days. I mean, this is people — not just institutions here. People saw the volatility and sold. Do you think they’re being silly, reacting like this?

Jason Zweig: Not necessarily. I guess there’s two points I would make. One, somebody else bought that $20 billion worth of stocks. It’s not as if $20 billion came out of the stock market and disappeared. But the other point is maybe some people are reassessing their own tolerance for risk. And if you believe that the stock market always goes up and you suddenly learn that, no, in fact often it goes down, and you don’t like that, then you’re probably overexposed to stocks and you probably don’t have the realism it takes to invest for the long run.

Brancaccio: I mean somebody also looked at the long run that led up to this, and thought, “Well, it was enough for me. Although I lost 10 percent in the last couple of days, happy to lock in what I have that led up to it.”

Zweig: Well, sure. Although you sort of can’t have one without the other. The potential higher risk that stocks provide in the long run is compensation for the fact that in the short run you can lose amazing amounts of money in remarkably short periods of time. I mean, in the past 20 years, the U.S. stock market has gone down roughly 50 percent, twice. And if you’re on the verge of retirement, then you should limit the amount you have exposed to that sort of risk, unless you’re sure you can withstand it.

Brancaccio: I could ask if that selling frenzy we saw, especially late in the trading session yesterday, was the sort of, what do they call it capitulation, that could spell the end of this rough patch. But you don’t even like any of this market timing. You think that’s a fool’s errand.

Zweig: The real problem with all of this terminology is that we can only identify it for sure with hindsight. Right? Did investors capitulate? Well, we’ll know that when stocks go back up and stay there. So it might be capitulation, and it might not be. The most important thing for investors is to have a long-term plan and not respond based on the mood swings of a hundred million other people.