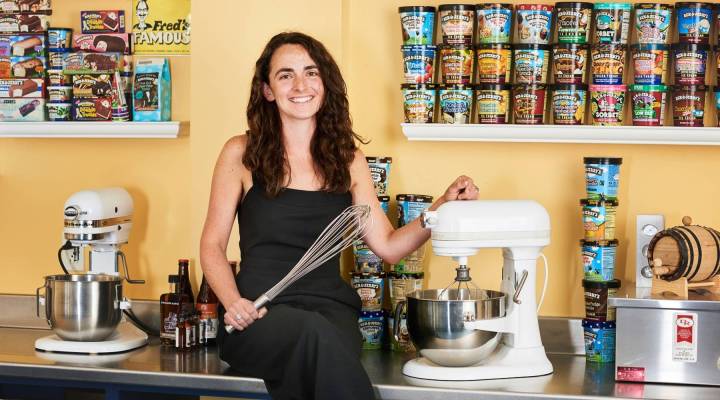 Everyone has a dream job growing up: doctor, vet, ice cream taste tester. But how do you actually get the gig? Marketplace Weekend is looking into how, with the occasional series, How to be a…

Sarah Fidler started working at Ben & Jerry’s about a year ago after studying food science, attending culinary school and working in the food industry. She spoke with Marketplace Weekend about how to be an ice cream flavor creator.

I am Sarah Fidler, I’m a Flavor Guru at Ben & Jerry’s. It’s basically a combination of some food science and a lot of chef skills: working with our Consumer Insight team to figure out what’s trending right now, then the flavor gurus get together do some brainstorming, and then have a fun job of going into our test kitchen and make up a lot of different variations of ice cream products, and taste them all.

I’d say in a typical week, at work, I probably eat about two pints [of ice cream], total. I probably have about 15 pints in my freezer at home, and pretty much every night I’ve been digging in. I graduated with a food science degree, and very shortly after I decided I want to go to culinary school. I was looking for a way to marry my love of food with my kind of natural tilt toward science, and the interest that I had and food science.

We actually have a few chefs that don’t have a science background on the team and  some people who have really strong chemistry or flavor backgrounds. We all balance each other out really well and learn from each other’s strengths.

I think the most important thing [to being an ice cream flavor creator] honestly is kind of an open mindedness. Everyone’s really excited to try something they haven’t tried before,  you know give their honest feedback and see what curry might taste like in an ice cream, or what figs taste like, or something like that that you might not expect. It definitely helps to have a background in knowing what might go together and what might not, but at the same time being open and saying, “You know maybe when I tried this in a cookie it didn’t work, but maybe it’ll work with an ice cream background.”

When I first started I was encouraged to just play around in the test kitchen, don’t think about trying to make something for the market, just learn how to make ice cream on a small scale and play around with whatever you’d want to play with. So I made a curry coconut ice cream, which I thought was pretty delicious. And a few other people thought it was delicious, but I think it has a few years before it might become a fan favorite.

A lot of my friends think that I spend most of my day making and eating ice cream … and I do spend a good amount of time making and eating ice cream. But I think a lot of people would be surprised to know how much of my job is kind of typical office stuff, doing paperwork, going to meetings. I think a lot of people are like, “Wow, you have the best job, you just get to play with ice cream.” Yeah it is a pretty awesome job … but there’s also a lot of paperwork.