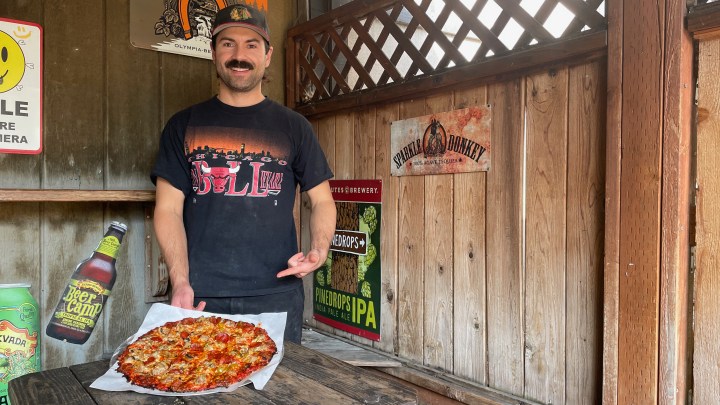 COPY
Pizza maker Jerry Benedetto has a one-person business making and selling pizzas. He takes orders once weekly for about 100 pizzas —and sells out in three to five minutes, he said. Katia Riddle

Pizza maker Jerry Benedetto has a one-person business making and selling pizzas. He takes orders once weekly for about 100 pizzas —and sells out in three to five minutes, he said. Katia Riddle
Listen Now

Pizza maker Jerry Benedetto knew he had a good product when one of his customers got emotional over it.

“He just kind of started tearing up,” Benedetto said. The customer was picking up an order. “He goes, ‘Yeah, sorry — the bag, the smell … just kind of hit me at once. Me and my dad used to get pizza every Friday. My dad passed away a couple years ago.’”

“It is a concept that is gaining traction,” said Greg Astley of the Oregon Restaurant and Lodging Association. “From a labor standpoint, you don’t have to worry about a front of the house, you’re not worrying about wait staff or any of those things, you’re also cutting down on your square footage.”

These entrepreneurs are meeting a market need: Serving people who might otherwise go to a restaurant but are having second thoughts with ongoing COVID-19 surges, and still want a break from their own kitchens.

Benedetto makes his pizza at a small tavern called the Bear Paw Inn, where he’s struck up a deal with the owner to use the kitchen. Customers can either eat it there or take it home. Tucked behind the bar across from the video poker machines, he runs dough through what’s called a sheeter, which makes it thin.

“Put a little sauce in the center and then you just kinda do one of these,” he said, swirling the sauce with a spoon.

When he moved from Wisconsin to Portland, Benedetto said he couldn’t find the kind of tavern-style pizza he grew up with, a thin crust with a bit of chew to it. He taught himself how to make it and started selling it during the pandemic. Now, he said, his weekly order list sells out in between three and five minutes online. His pizzas go for about $20.

About a mile away, vegan food is on the menu at Dax McMillan’s food cart, Daily Fuel, which is in a pod of about 20 food carts. McMillan and his wife are the only staff. He used to be a chiropractor before quitting to build this vegan food business. He said he’s brought in about $200,000 in sales just this year.

“I’m making more money on a food truck, working in jeans and tennis shoes than I was … running around hospital to hospital,” he said. McMillan and his wife work 12- to 16-hours shifts. County officials there reported a nearly 10% rise in the number of food carts in the last year, while the number of conventional restaurants has declined.

Some micro restaurants don’t have a storefront at all; the National Restaurant Association recently identified “placeless” restaurants as a disruptive industry trend.

Standing in a walk-in freezer, Kiran Cheema gestures at hundreds of frosty ice pops in flavors like Vietnamese Iced Coffee and Cookies and Cream. Cheema runs a business with her husband from a bike cart, Kulfi PDX. The kind of ice cream they make and sell — kulfi — originated in India, where her family is from.

She’s barely been able to keep up, she said. “All summer I kept saying ‘I gotta hire somebody.’ But I just never got around to it, and we kept kind of being able to do it on our own,” she said.

With still-increasing demand, she said she can’t ignore the problem. In the last week of August, she and her husband set a personal record when they made and sold 3,000 ice pops.