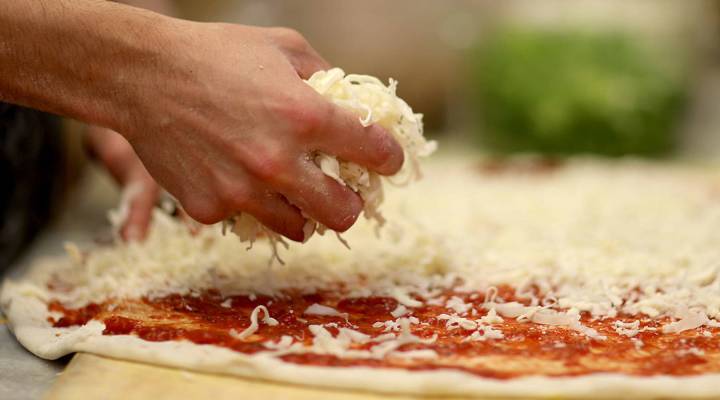 Leprino Foods is a company you’ve almost certainly never heard of, but whose product you’ve almost certainly consumed. It makes a billion pounds of cheese each year and controls as much as 85 percent of the pizza cheese market as a supplier to Pizza Hut, Domino’s and Papa John’s. Chloe Sorvino of Forbes magazine’s billionaires team visited the Leprino Foods test kitchen in Denver and James Leprino, the “Willy Wonka of cheese.” She talked with Marketplace host Kai Ryssdal about how this pizza cheese empire came to be. The following is an edited transcript of their conversation.

Kai Ryssdal: This is, I will tell you what, kind of a crazy story. Tell me about James Leprino, would you?

Chloe Sorvino: Yes, so James Leprino is the son of an Italian immigrant. He and his father started what has become the largest mozzarella company in the world. The company is very little well known, but everyone in America has probably eaten one of his products, from the cheese on Pizza Hut, Domino’s, Papa John’s pizza, a Lean Cuisine meal, Bagel Bites, you name, his mozzarella cheese is pretty much on it.

Ryssdal: So, you went out actually to the headquarters in Denver. So first of all, you got an interview with Leprino, which is no mean feat because, a great tidbit in the story is you try to get a picture of him on Google, and it shows up with other billionaires.

Sorvino: Yeah. We have had him on our billionaires list for a decade, and we’ve never had a photo. No one really knew what he looked like. When I went out to Denver, you know, I was really excited, and the first thing he said to me really was “I can’t believe I agreed to do this.” So, I don’t know if it was my Italian last name or what.

Ryssdal: He starts this company, or he gets into the business after his dad opens a grocery store, right? Dad comes from the old country and Leprino sort of picks it up from there?

Sorvino: Yeah. So, you know, it was at a time when a lot of Italian immigrants were starting businesses, and they were doing what they loved, and they were doing what they grew up on — making pizza or making cheese, making pasta. So, he was making these mozzarella balls by hand with his dad. And he was hanging out in pizzerias with his friends during high school, after high school, and he realized that with American GIs coming home from the war and craving pizza slices and this culture of pizza parlors, that this is going to be something that’s really growing. And in the next few years, all the major chains were popping up and growing exponentially.

Ryssdal: Domino’s and Pizza Hut and Papa John’s — I’m sure they compete to the death for their customers. And yet somehow they buy cheese from the same guy?

Sorvino: You know, that was the craziest thing to me, and you know, Burger King and McDonald’s — one sells Coke, one sells Pepsi. So, fact that this company has been able to do this is remarkable, and it’s because that they, I think, have kept such a low profile for so long. I mean, the company even isn’t even that well known in Denver. You know, on top of that, they make each of these cheeses slightly different. This test kitchen they have is remarkable. There are 12 or so ovens. They have Pizza Hut’s oven, they have Domino’s oven, they have Papa John’s oven.

Sorvino: Yeah, I mean, that’s part of it, right? I mean they make the spec on each contract because they want a different product. So, Pizza Hut, you might be able to recognize it from small dark bubbles on top. They spray on an additive before the cheese-making process begins, and depending what’s in that additive, they’re able to make that cheese work differently.

Ryssdal: Behave differently in the oven?