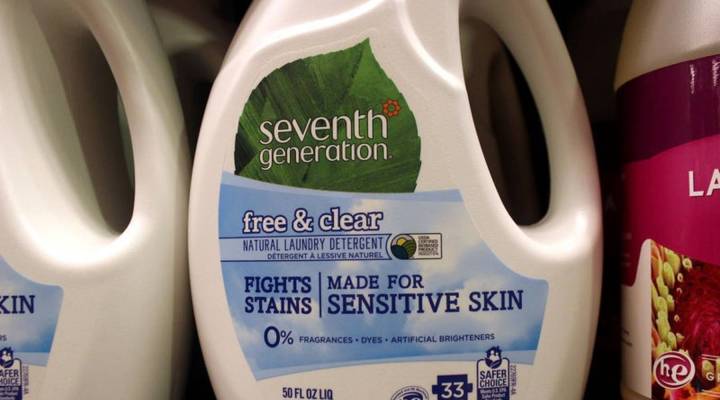 Seventh Generation brand manager John Moorhead remembers the day everybody learned about the merger with Unilever.  He knew something was up when he saw an invitation to an all-staff meeting pop up on his calendar on short notice.

“So I think going into the room we were all probably a little nervous because there were more people with suits than we are used to seeing here,” said Moorhead.

Moorhead says it was very quiet in the room when the suits made the announcement.  But both the Unilever reps and Seventh Generation leadership assured employees that the company would retain its core culture and mission.

The Seventh Generation lab, where lab techs keep photos of animals on the walls as a reminder of why they use sustainably-harvested palm oil.

When the natural homecare company Seventh Generation was founded in woodsy Vermont back in 1988, the idea that a business would strive to do good for society and the environment was something of a fringe concept. But nowadays, mission-driven companies are some of the fastest-growing; and giant corporations like Unilever are getting in on the game.

It’s not the first Vermont-based company that multinational corporation has acquired: it bought the quirky ice cream brand Ben & Jerry’s back in 2000. That acquisition served as something as a template for how Unilever and Seventh Generation worked out their purchase agreement.

In many ways, the companies couldn’t be more different. The Seventh Generation office has a tight-knit family feel. The lab techs keep a photo of an orangutan posted on the wall as a reminder of why they use sustainably-harvested palm oil.

Unilever didn’t respond to requests for an interview. But Seventh Generation CEO John Replogle says he’s excited:  “Seventh Generation is really accessing and leveraging the global platforms of Unilever so we can scale, so we can have more impact, so we can reach more consumers,” said Replogle.

“We’re moving from serving millions to hopefully one day serving billions of consumers around the world,”  he said.

Replogle actually worked for Unilever for two-and-a-half years, managing the skin care products division. Now, back at the homegrown Vermont business, he’ll help oversee the purchase of this 170-person company by a 170,000 person company.

Replogle points to Ben & Jerry’s. Back in 2000, the giant Unilever purchased the oddball, mission-driven Vermont ice cream company.  And that acquisition was not easy for either party.

“It is no secret that there were a few years after the acquisition that were rough years,” said Chris Miller, a social mission activism manager at Ben and Jerry’s who worked for the company through the rocky transition.

“I think any time you take two different companies—particularly in this case with profoundly different cultures— and try to pull them together, history has shown those kinds of mergers don’t always go particularly smooth,” said Miller.

He said that the relationship between Ben & Jerry’s and Unilever evolved into thriving partnership. Ben & Jerry’s has retained a good deal of autonomy: Not just its dog friendly offices with an indoor slide, but also the freedom to endorse social activism movements like Black Lives Matter.

But some people back at Seventh Generation some still have questions, like the company’s mission and advocacy manager Ashley Orgain. She says she’s confident that her social mission work will continue. Still, she says there is some romance lost.

“I don’t know yet how it’s going to feel, but I know I’m not working for a small Vermont-based business, I’m now working for a large multinational corporation, and that’s going to come with some compromises, no doubt,” said Orgain.

For Unilever, on the other hand, the acquisition will expand the European company’s foothold in “green” homecare products, and give it a competitive edge in the United States market, where its main rival is Procter and Gamble.