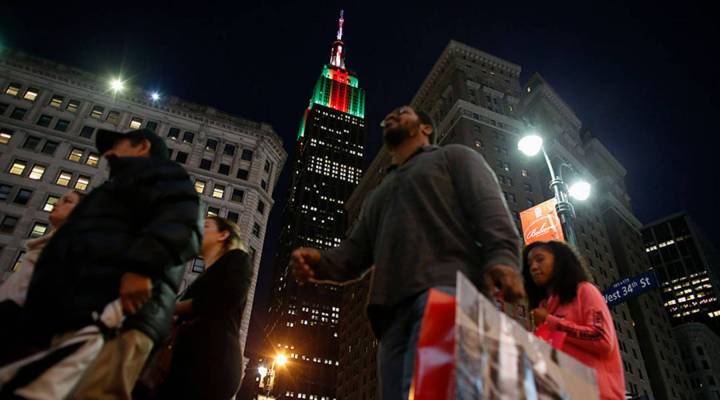 COPY
“2017 was a real rocky road for a lot of retailers, especially in the apparel sector,” says Elizabeth Holmes, who covers retail. Above, Christmas Eve shoppers in New York City in 2015. Kena Betancur/Getty Images

“2017 was a real rocky road for a lot of retailers, especially in the apparel sector,” says Elizabeth Holmes, who covers retail. Above, Christmas Eve shoppers in New York City in 2015. Kena Betancur/Getty Images
Listen Now

If you spent the last few weeks of 2017 frantically running around a shopping mall, the retailers of America probably owe you one. Despite the negative forecasting for the future of brick and mortar, retailers had a strong holiday season. Holiday sales were up almost 5 percent over 2016, according to Mastercard. Marketplace host Lizzie O’Leary spoke with journalist Elizabeth Holmes, who covers the retail industry, about why there was such a strong showing for retailers. The following is an edited transcript of their conversation.

Lizzie O’Leary: It looks like we actually had a pretty good holiday retail season — some sales up as much as 5 percent this year. I mean, how big of a deal is this season?

Elizabeth Holmes: You know, early indications are that people were feeling really good this holiday shopping season. They’re feeling better about their personal financial situation, and they wanted to sort of get out and spread a little holiday cheer to open their wallets. So yeah, retailers are excited. It’s the best year over year growth since 2011, according to early numbers.

O’Leary: Do we have a sense of what drove those numbers? Whether we’re talking about this sort of feeling of economic well-being or bonuses, wages or anything like that?

Holmes: I think it’s a combination of things. I think people are feeling better about the overall economy as well their personal situation. What I would say is that this is not necessarily a green line for retailers here, that they still have some struggles ahead in 2018. A lot of the spending went towards experiences, you know, people wanting to take someone out to dinner or buy a plane ticket and go on vacation, that kind of thing, rather than buy something to wrap and put under the tree.

O’Leary: Yeah, because I was going to ask you how we square this season with the other big retail trend, which is like the death of the mall or the brick-and-mortar store. How do they go together?

Holmes: Absolutely. So, you know, 2017 was a real rocky road for a lot of retailers, especially in the apparel sector, which I follow pretty closely. Department stores in particular had a really hard time. And so as we see these really positive numbers for a lot of categories, that’s happening in electronics, that’s happening for some in jewelry, but apparel seems to continue to struggle a little bit. And I would say that going forward, retailers have to continue to fight that urge to promote and discount everything as much as they have been because the shopper is still obviously very addicted to discounting, and they’ve got to up their retail experience to bring people into the stores.

O’Leary: I’m really curious about this sort of tie-in effect. So, I’m going to admit and out my mother here. She gave me an Instant Pot for Christmas, this, like, multicooker thing.

Holmes: Yes, it was the gift of the season.

O’Leary: It was the gift of the season. But along with a pretty sophisticated cookbook that goes with it. Can we spin out from that anecdote a sense of not just the hot gifts but how you really packaged them in this modern kind of way of “here’s the experience that’s going to go along with it?”

Holmes: Oh, absolutely, and I think that’s the real win for retailers if they can get you in the door to buy not just what you had on your list, but something that makes it feel a little more special, a little more personal. So your mom really went for it there, and I think, you know, that’s what all retailers want. They don’t want to just sell you a sweater, they want to sell you a scarf to go with that kind of thing. And I think in particular about the Instant Pot, it is a chance to do something right. It’s not just, you know, you buy a sweater and you wear it once, but if you have that cookbook, you can enjoy it throughout the year, you can try different things that makes it more than just sort of a one-off gift. It makes it something that has a little longevity to it.