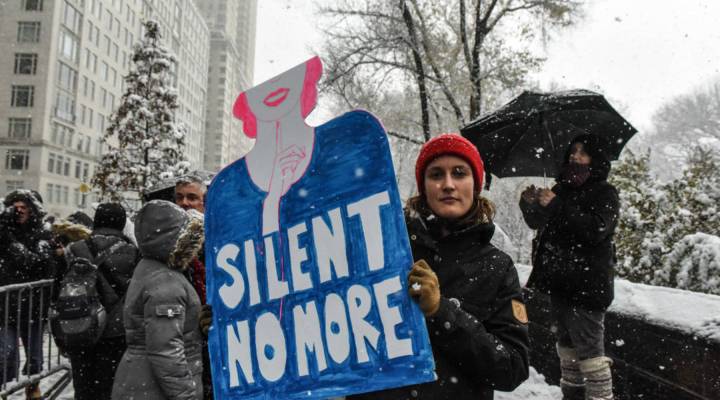 COPY
Women have been speaking out about the men who harassed and assaulted them. Now what? Stephanie Keith/Getty Images

Women have been speaking out about the men who harassed and assaulted them. Now what? Stephanie Keith/Getty Images
Listen Now

Massive cultural changes are sweeping through American workplaces since news broke about the predatory behavior of Hollywood producer Harvey Weinstein. It’s not an exaggeration to say we are in the middle of a reckoning, but how to puzzle through it and what comes next are harder questions to answer. So Marketplace Weekend brought together a panel of experts: Lili Loofbourow, culture critic for The Week, Susan L. Marquis, dean of the Pardee RAND Graduate School, and David Lewis, CEO of OperationsInc and a human resources consultant. Loofbourow has written many pieces about the “me too moment,” including one on the myth of the male bumbler, or the man who is willfully or neglectfully incompetent in order to avoid his complicity. Marquis wrote a book called “I Am Not a Tractor!” on how women farm workers in Florida organized and combated harassment. The following is an edited transcript of their conversation.

What are H.R. departments thinking about right now as we look toward this new year?

David Lewis: Right now, HR organizations for some companies are trying to figure out how to get leadership behind them and be supportive of their initiatives and their recommendations. I think in other HR organizations, they’re trying to ensure that they’re not the ones that get mentioned in the news the next time. So they’re going to leadership and emphasizing the importance of training, of best practices and of ensuring that the culture in their organization is not one that supports hostile work environment.

How do we figure out what punishment fits what behavior? Is there some gradient of behavior that we are talking about?

Lili Loofbourow: You know, Matt Damon isn’t the first to suggest that we should probably come up with some kind of hierarchy of harm. Michelle Goldberg did it at the New York Times. I’ve done it too. You know, the reason we need that isn’t just to safeguard the reputations of men, but it’s also that we’ve naturalized harassment in this culture to a certain extent, and we need to denaturalize it and name behaviors that we’ve long turned a blind eye to since Anita Hill testified against Clarence Thomas in 1991. And women realize that: A, there was a name for what they’d experienced, and B, it was possible to make it stop. Reports of sexual harassment increased and kept increasing. And that’s not because women are telling fake stories, it’s because they don’t have to put up with it anymore. And applying that lesson to the present, it seems clear to me that sexual harassment is too broad an umbrella. You know that story about the Eskimos having 50 words for snow? It’s apocryphal but it’s relevant here. A culture needs a language that’s rich enough to precisely describe its environment, and it’s clear that for ours, sexual harassment is way too broad. We need more precision.

What’s a model for both punishment and solutions? How can real, measurable consequences for harassment be put in place?

Susan L. Marquis: So, [in the case of farm workers in Florida,] it’s not just the female farm workers who have come together, it’s all the farm workers. The point is that it’s the workers, the migrant workers beginning in Florida and moving up through the southeast states, have faced appalling conditions in the fields. Sexual harassment itself comes into play every day. It’s a very different working situation than an office. Obviously, you’re isolated in the fields, you’re subject to crew leaders who say sexual favors are the price of a job. The way they’ve addressed this issue is … several different ways. One is worker education, making sure workers know what their rights are. It’s a matter of comprehensive monitoring that includes not just audits, but a 24/7 hotline and protection from retribution. And when violations are seen to occur, there’s real-world market sanctions, either the crew leader who may have committed this abuse or the co-worker is fired immediately. Or if the grower does not come into compliance, they lose their market. That’s 60 percent of the market for tomatoes, for example, are part of the Fair Food Program, and those buyers are not allowed to buy from any grower that’s in violation of the standards. So it’s a comprehensive approach that includes education, monitoring and real-world market sanctions.

Is there a way to take this Fair Food Program model and expand it to other industries?

Lewis: I think [there] is, but I just don’t know that it’s very practical because you’re going to get a lot of pushback. Everything comes back to how the investigation is done and how objectively the company goes through that process. With that said, you know, I’ve been doing this 32 years, and I can tell you that if I go in on an investigation and find someone has been the source of harassment and has done so purposely in my opinion, and for that matter also repeatedly, the recommendation’s to terminate. And more so when you take a look at cases where, in that case, the person who was the harasser goes to court and claims some type of wrongful discharge, they lose those cases by an overwhelming majority. The courts have no tolerance for this kind of behavior, so, you know, companies need to look at this issue not in terms of the typical fear that they have regarding cases involving discrimination and wrongful discharge and fearing that they’re going to be sued in those instances, and instead recognize that the best and easiest path is to fire people when they behave this way because it sends a message, and the message you send to everybody else when you keep people around and say, “Don’t do this again, we’re going to send you for training so that you don’t do this in the future,” is not the message that gets cultural change.

When it comes to punishment, how do we figure out the difference between “Hey, Bob, don’t do that” versus “Bob, you’ve lost your job.”

Lewis: So I think that most employers look for sort of the rule book when they come to us and they ask us, you know, the do you have a “if, then” statement that says, “If somebody does this, then we do that”? And that just doesn’t exist out there. So the first step is for companies to go ahead and decide what their culture is going to be and how are they going to, at least going forward, handle these types of issues and mitigate them when they occur. Then the most important piece of that after is to be consistent. I mean, there’s too many times where we’ll go in and we’ll talk to someone where the company has terminated immediately an individual in a lower-level role for the same kind of behavior that they’re about to do retraining for someone who’s at a senior-level role. You know, the head of sales tends to get away far more with the same kind of behavior that is not tolerated by someone who’s working in the mailroom.

How do we empower people who are at the lower end of a power differential?

Marquis: The ways to get at this power aspect is to begin with recognizing the expertise of the women themselves. That the women have experience in the field, experience in their work situation. They have an expertise in the conditions that allow this behavior to occur. David talked about the culture, and that’s critical, but there’s also physical conditions that we’re talking. Some of these restaurants, there’s late-night, post-shift activities, isolated storage rooms. The workers have seen the same things in the fields. If you can ensure women have a place at the table where the company is making its policies, you have much better probability of coming up with successful solutions. They can say, “it is in these conditions that this kind of behavior tends to occur,” and those conditions can be addressed.

Lewis: I want to put a spotlight, though, on the fact that what was just described is now happening in a lot of millennial-driven organizations as well. In many of the tech firms and millennial-driven populations, there’s been a trend to go ahead and to turn these work environments into more fun environments. You’re finding ping-pong tables, foosball tables, pantries that actually have alcohol in them and it’s 7 o’clock in the evening. The workplace looks more like the happy hour at a local bar than it does the workplace. Then the one other alarming piece around this particular issue is that a lot of those companies are also hiring HR people that are more oriented on attracting and retaining talent, not on handling these types of complex employee relations issues. So now they get into situations where you have harassment claims, which are being driven and fueled by the fact that there’s an environment that’s more like a bar than a workplace, and suddenly you’ve got things that are potentially spinning out of control. This isn’t just about some of the, you know, blue-collar or service-oriented businesses. This is now very much a problem in corporate America.

Lizzie O’Leary: Well, wait a minute though. Lily, I want you to hop in here because you’re looking at this from a 30,000-foot cultural standpoint, and well, what is a modern workplace? Do we come close to victim blaming if we’re saying, “Well, gosh, we were all at the Christmas party.”

Loofbourow: I mean, I think it’s instructive and significant that the initial wave of allegations actually came from the entertainment industry where those distinctions actually are invisible. There is not necessarily an HR department in a lot of scenarios that would be able to respond to some of the concerns that came up. That said, I think we can learn a lot about what that kind of environment does and how it can change. And, you know, I think that one reason that we are seeing the beginning of the backlash that I’ve long been expecting to the “me too moment,” so to speak, is because we are seeing consequences being delivered piecemeal through what seems to amount to an inverse popularity contest in the entertainment industry. Look, the public was needed to get this ball rolling, and now it’s up to us to figure out what a good system should be, and I think we need a precise lexicon of unacceptable conduct. This is going to be slow, and it’s going to be hard, and it’s important that we be thoughtful and proceed with care.