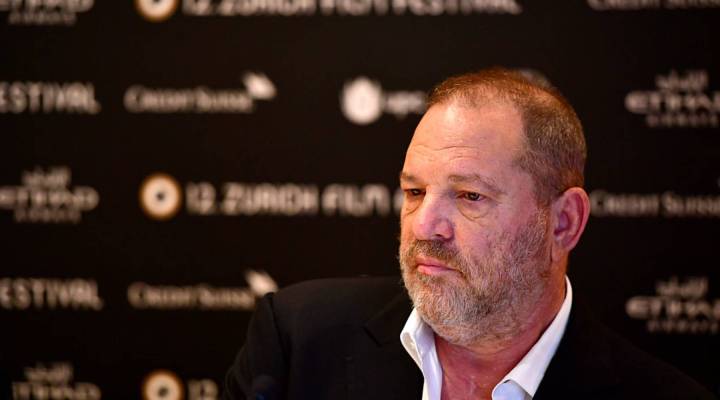 COPY
Film producer Harvey Weinstein was fired as CEO and co-chairman of the Weinstein Company after allegations of sexual misconduct were reported by the New York Times. Above, Weinstein speaks at the Zurich Film Festival on September 2016 in Zurich, Switzerland. Alexander Koerner/Getty Images

Film producer Harvey Weinstein was fired as CEO and co-chairman of the Weinstein Company after allegations of sexual misconduct were reported by the New York Times. Above, Weinstein speaks at the Zurich Film Festival on September 2016 in Zurich, Switzerland. Alexander Koerner/Getty Images
Listen Now

Allegations of sexual misconduct by the film producer Harvey Weinstein continued to pile up Tuesday. The New Yorker published a piece in which three women accused Weinstein of rape. Weinstein denied the allegations through a representative. Expanding on an earlier investigation, the New York Times reported that actresses Angelina Jolie and Gwyneth Paltrow were among those allegedly harassed by Weinstein over a period of decades.

The Weinstein Company, meanwhile, is working quickly to distance itself from its co-founder. The board fired Weinstein as CEO and co-chairman over the weekend and is said to be removing his name from the credits on current projects, as well as changing the company’s name. But rebranding can be especially challenging when the man himself is, in many ways, the brand.

Weinstein is considered the driving force behind the company he co-founded with brother Bob Weinstein. A 2015 analysis of Oscar acceptance speeches by Vocativ found that Harvey Weinstein’s name showed up more frequently than God.

“There are advantages and disadvantages, clearly, to having so much of the brand equity put into one person’s name,” said Gene Grabowski, a crisis management expert at kglobal.

The Weinstein Company has one advantage, said Karen Post, author of the book “Brand Turnaround.” Unlike other tainted company founders, like Martha Stewart or Lance Armstrong she said, “the straight-up consumer that is not as aware of his name probably doesn’t even give two thoughts about it when they’re deciding to go to a movie or to watch a television show or to enjoy a product that he created.”

Actors and entertainment executives do, though. Winning back their trust will take more than a name change, said Elizabeth Toledo, president of Camino Public Relations.

“They need to make some significant efforts to tell their publics, their communities, their advertisers that they are truly engaging in reform,” she said.

Another possibility is a sale, said Jason Squire, editor of “The Movie Business Book.”  The Weinstein Company’s vast film library includes hits like “The King’s Speech” and “Lion.”

“It really puts the company in play and a target for acquisition,” Squire said. “It makes them terribly vulnerable.”