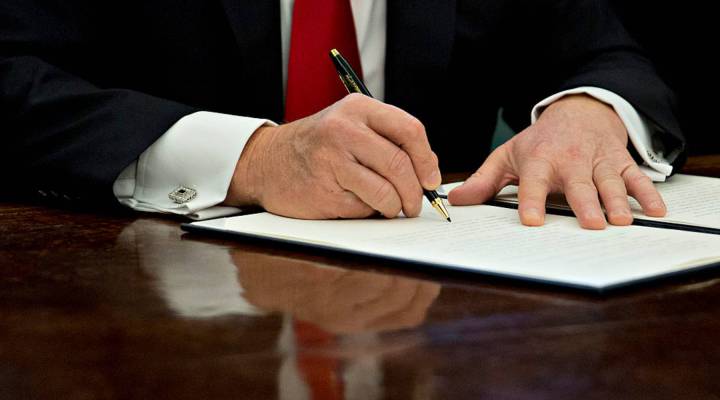 President Donald Trump is killing regulations with a caveat — many are already dead. In a meeting with House Republicans last month, the president said: “In the history of our country, no president, during their entire term, has cut more regulations than we’ve cut.” But according to Alan Levin of Bloomberg, the president is exaggerating. Marketplace host Kai Ryssdal spoke with Levin about his latest article looking into the Trump administration’s record on regulatory cuts. The following is a transcript of their conversation.

Kai Ryssdal: It’s interesting that you point this out at a time when the administration is still in a lot of ways looking for its first big legislative win.

Alan Levin: I mean, first it needs to be said that the Trump administration is very aggressively going after regulations. There’s no doubt about it, when you look at climate change and financial oversight and that sort of thing. But it was very important for the president to cite high numbers. He’s made some pretty dramatic claims in recent weeks. Part of it needs to be viewed through this prism of them not having this big legislative victory.

Ryssdal: One of the things you point out actually, just to that question of the Trump administration actually going after regulations very hard — because they are and elections have consequences, as OMB Director Mick Mulvaney said the other day — part of what’s happening here in the regulatory space is the question of tone. It’s people being appointed to these jobs who are interested in whatever their regulatory agency happens to be, doing less of what that agency does. The EPA, for one, is the big example.

Levin: Yeah. I mean, there’s no doubt that that is occurring. One of the things I did is look at the number of regulations that have been reviewed by the arm of the White House that sort of has a final signoff on regulations, and they’re down substantially from prior years, about one quarter as many as the Obama administration did a year ago during the same period.

Ryssdal: You point out in this piece that there are laws on the books designed to prevent regulations from coming and going too quickly. In other words, designed to maintain some kind of regulatory stability.

Levin: Yeah, absolutely. Both Democratic and Republican administrations in the past three or four decades have imposed a lot of these rules that are designed to ensure that a rule has benefits that pay for the costs of the rule. The process is designed to move slowly so we don’t act precipitously and put something into effect that we might regret. But what that means is it’s been very difficult for the Trump administration to actually kill existing rules. And so if you take out of the picture rules that Congress killed, which is 15 so far this year, the Trump administration itself has only gotten rid of perhaps about a dozen existing rules by most counts.

Ryssdal: Just dig into this a little farther, if they’re not actually killing regulations already on the books, what are they doing with them? What’s the — I guess it’s a process question, right? What’s the process steps that they’re taking?

Levin: Well, I’ll give you some of the examples of the claims that they made. A year and a half ago, the Environmental Protection Agency announced it was halting work on a long and contentious regulatory action to oversee runoff from forest roads that loggers cut or whatnot. They decided there was no need to go forward with it, but it was not officially taken off the books, so this spring the administration killed that off and declared it as a victory of deregulation.

Listen to the stories of federal regulations that touch our lives every day on The Uncertain Hour.