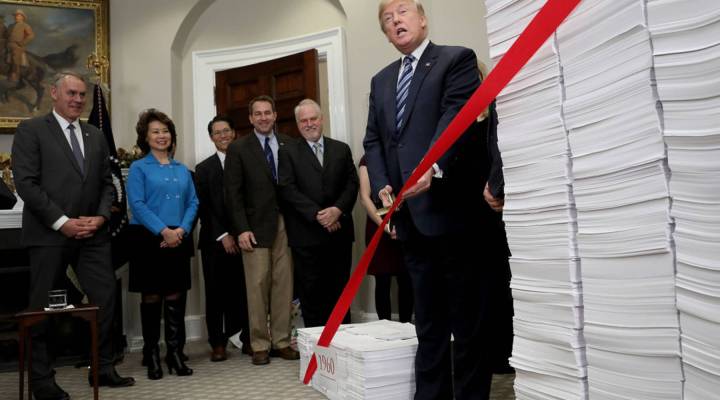 Marketplace’s wealth and poverty team has spent almost a year exploring regulations for our podcast “The Uncertain Hour.” Host Krissy Clark joined us to talk about deregulation under the Trump administration.

Krissy Clark: Right after he took office, President Trump signed a couple of executive orders aimed at reducing regulations. And one of the things that he’s said a lot recently is that he has cut more regulations than any president in history. Here he is speaking at the American Farm Bureau Annual Convention in Nashville, Tennessee earlier this month.

Trump: Within our first 11 months, my administration has canceled or delayed over 1,500 planned regulatory actions or assaults more than any president in the history of the United States.

Amy Scott: “Assault!” That word tells us a lot. Fifteen-hundred sounds like a pretty big number. Can you break that down for us?

Clark: I will try. It’s actually pretty complicated math. Bloomberg did a great article on this, and let me break it down a little bit. So, only a handful of regulations have actually been taken off the books under the Trump administration. A lot of the things that are included in that 1,500 number involve stopping proposed rules that hadn’t actually made their way onto the books yet. The White House says it has killed or stalled 860 pending regulations. It’s withdrawn 469 and it’s listing another 109 as “inactive” and relegated 282 of them to “long term.” So it’s not as simple as just killing regulations. The Bloomberg News review found hundreds of the regulations that the White House is talking about in this deregulatory tally were pending regulations that had actually been effectively shelved before Trump took office. Part of why there’s not as many that have just been straight up killed is that it actually takes a lot to undo a regulation you have to go through a long process. There’s a notice-and-comment period and discussions, and you need to justify that you have the technical grounds for repealing a rule. So, it can’t just be that you don’t like a rule, and it’s not as easy as just taking out an eraser.

Scott: So what does it take? Can you walk us through an example of something he has managed to undo.

Clark: So, a good example of how this has worked for the Trump administration is their effort to repeal the Obama-era net neutrality rule. This is the rule we’ve heard a lot about that would have prohibited broadband providers from favoring some websites over others. Way back in April, President Trump’s Federal Communications Commission announced their intent to overhaul net neutrality, and they released a draft for public comment. The way that Congress designed the system, people can submit comments on any proposed regulation. An agency like the Federal Communications Commission makes the draft of a proposed rule available for the public to examine. Citizens have a set time period, usually between 30 and 60 days, to submit comments. And actually you right now could go to regulations.gov and comment on something yourself.

Clark: So the FCC received a flood of comments on its draft proposal to repeal these net neutrality rules. In total, more than 21 million comments were submitted electronically and posted online for review.

Clark: It’s a huge amount. And federal agencies like the FCC are supposed to consider all these comments as they develop a regulation, but it’s important to note that comments are not votes. It’s a way to help agencies make informed decisions. But it’s not like majority rules.

Scott: So Krissy, you’ve spent much of the past year digging into federal regulations and what they mean in our daily lives, but how much do you think the average person really understands, or even cares about, this deregulatory agenda of the president’s? Is this a kitchen table issue?

Clark: Well, regulations for a long time they’ve kind of been the stealth issue, right? Maybe we hear about them but we don’t really know how they work or what they do. They’re very technical and wonky. But now it is becoming more in the public eye. An example of just how important this issue is to the president is the big speech he gave last month at the White House. He talked about regulations and brought some stage props with him. He stood between these two stacks of paper.

Trump: You can see another really vivid illustration of the monumental task we face. In 1960, there were approximately 20,000 pages in the Code of Federal Regulations. Today there are over 185,000 pages. So you take a look at that, and I assume that this is today, this is 1960. We’re going to cut a ribbon because we’re getting back below the 1960 level, and we’ll be there fairly quickly.

Clark: And just for the visual: the stack from the 1960s came up to about his knees, and then the other stack from today is like taller than Trump is. And after his speech he literally cut a piece of red tape to symbolize how many regulations he was going to get rid of. One thing that’s important to point out is that yeah, the Trump administration is indeed in a deregulatory mood, but his assertion that they’re going to get down to those 1960s levels of regulations — not even his own regulatory czar that he appointed thinks that would be possible without legislation.

Scott: About a week and a half from now President Trump will be giving the State of the Union address. With all of this perspective you have now what are some things you’re going to be listening for?

Clark: Yes, so I’m definitely going to be listening to hear how many regulations he says his administration has canceled or delayed so far. I’m going to be curious to see if he’ll name any specific rules that he is focused on next. And I’m also just interested in hearing how he talks about the relationship between businesses and corporations and regulations. He often uses the phrase “job-killing regulations” or “job-killing rules” and he talks about how businesses are leaving our country because we have so many rules. We actually did a whole episode on the relationship between corporations and regulations and it turns out that it goes back a long way and it’s much more complicated than just businesses hating regulations and wanting them to go away. Often businesses are using regulations because it helps level the playing field for the industry.