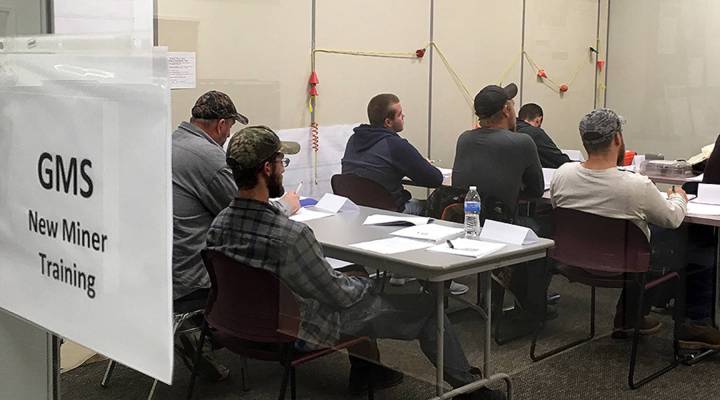 In a packed classroom at a career center in Greene County, Pennsylvania, Adam Maley is learning the skills of a dying profession: coal mining. Maley and roughly 20 classmates are being shown how to stay alive by breathing properly during a mine emergency.

They’ve paid $200 a piece for this two-week course. Despite huge layoffs and a shrinking market for coal, mining still has a hold here. Even if its rebirth hasn’t exactly been realized, Maley said.

“I fell into the common error that, you know, I thought that the day Trump got elected my troubles was over,” he said.

President Donald Trump’s campaign promises to revive the industry were enough to lure Maley back to coal country from Miami about a year ago. Regulations have been rolled back, but the jobs haven’t followed.

“It doesn’t seem the case,” he said. “We’re kind of at the bottom of the barrel here.”

When Maley completes this course offered by GMS Mines, which provides contract workers to the coal industry, he’ll be trained for a job that pays $13 an hour. Down the line, he said, “If I could make 30,000 a year, I’d be happy. I wouldn’t be comfortable, but I could make it.”

Opportunities to be “more comfortable” are just down the hall, where training classes for growing fields like health care and trucking are offered for free. They’re funded by government grants for retraining that went to states like Pennsylvania, which were hard hit by the collapse of the coal industry. But Ami Gatts with the Workforce Development Board said they’re mostly empty.

Coal may have a better past than a future in Greene County. In the last decade, the number of mines has shrunk from 12 to three. The days of the unions and good salaries are long gone, but of the 10 biggest employers here, five are coal companies.  Gatts said workers are “going to have some questions and doubts, but I think they’re committed to it, because in Greene County, it’s been here for hundreds and hundreds of years.”

And that’s long enough, said Blair Zimmerman, chairman of the Greene County Board of Commissioners.

“If I had a young son that was looking at the coal industry, I’d say look somewhere else,” said Zimmerman, a retired coal miner himself. He made a good living in the mines, taking his kids on ski weekends and summer vacations and putting them through college. His job now is to move this region past coal.

“Shame on people before me in my position, [they] should have been looked at 50 years ago, what can we do beyond coal. My goal is to try to get industry, manufacturing here in Greene County,” he said.

It hasn’t been easy. He’s up against companies like GMS Mines, which sells the promise of a coal job as the route to the type of comfortable retirement common a generation ago.

“The idea is you go in there and you embrace the opportunities that are being given to you, and you are noticed, and the more noticed you are, the more opportunities will come your way,” explained Mary Beth Minor, a recruiter for GMS Mines.

Just because the industry has changed, she said, doesn’t mean it’s going away.