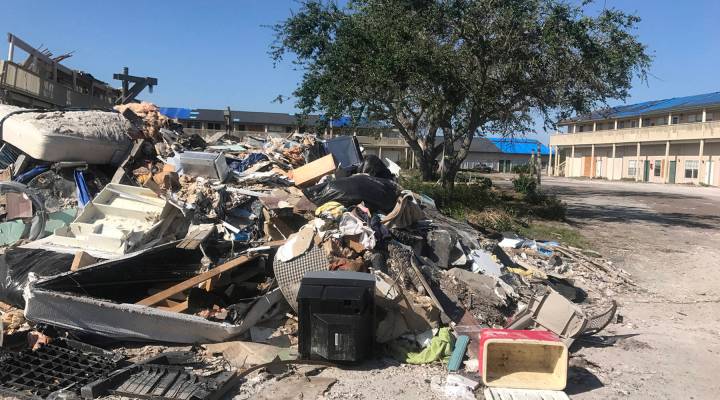 COPY
A hotel in Rockport, on the southeast Texas coast, is months, if not years, away from operation after Hurricane Harvey. Andy Uhler/Marketplace
Economics of Disaster

A hotel in Rockport, on the southeast Texas coast, is months, if not years, away from operation after Hurricane Harvey. Andy Uhler/Marketplace
Listen Now

It’s been more than three months since Hurricane Harvey devastated southeast Texas. The eye of the storm first made landfall in the coastal town of Rockport — population 10,000 — and the destruction is evident right when you arrive. It’s a tourist town, mostly charter fishing and bird watching. Local officials said that up to a third of the town’s full-time residents are displaced, living in other towns miles away. There’s no vacancy in hotels, even for those who received Federal Emergency Management Agency vouchers. Many live in damaged RVs, some in tents.

Like a lot of people in Rockport, Angela Treviño and her family currently live in their house, even though it flooded after Hurricane Harvey. The three bedroom, lime green ranch house now sits alone on their street. Most of the neighbors’ homes were completely wiped out. Treviño plans to repair the house, room by room.

“We have roof damage, which we have tarps on,” she said. “There’s mold that is now starting to grow, so we stripped all the carpet in the room and kind of tapered off that room so that nobody is in that room.”

She recognizes the mold is a health risk for her, her husband and their four-year-old and six-year-old children. But the family doesn’t have much choice — they applied for FEMA disaster relief, but they were denied. It’s not just them living in the damaged house, they’ve got extended family there, too.

“There is one room that doesn’t have any mold or anything and so there’s one family that’s in that room,” she explained. “There’s another family that’s in another room that’s way in the opposite side of the house and then me and my husband and our two kids are in the living room.”

It’s a complicated situation and it was complicated before the storm. Angela’s father-in-law willed the house and the large parcel of land to all of his children, so there’s no clear property owner. Three families lived on the property and used the same address.

Denied temporary housing assistance to pay for hotel rooms or to rent a place. Denied cash assistance for everyday needs.  FEMA representatives said Treviño and the other families on the property should appeal and try to get some assistance. But she said she’s not willing to deal with the headache.

“I’m done with that,” she said. “There’s just no point in going through the trouble, really.”

Even if the Treviños got housing assistance, right now there’s no place to stay in Rockport. They would likely have had to find shelter in another town, and Angela would have to commute to her job with the local District Attorney.

Rockport’s mayor, C.J. Wax, said the housing situation in his town is terrible.

“Every apartment building in town was damaged to the point that it is unoccupyable today,” he said from his makeshift office, miles down the road from city hall, which is now uninhabitable. “So, the availability of what I will call middle-income and lower-middle income housing is extremely limited.”

Many people who got FEMA money for housing are using it to rent places or get hotel rooms in Corpus Christi, 30 miles away.

So, what about the temporary homes that FEMA provides? The manufactured housing units, or MHUs? Mayor Wax said they’ve been slow to come.

There is one in a rural area outside of Rockport, along Rattlesnake Point. The place sticks out because you can count the standing homes here on your fingers. Rene Cartini and her husband, Bo, just moved into a unit last week. It’s a 1,200 square foot, three-bedroom, two-bath mobile home that is nearly the size of the house they lost to Harvey.

Rene Cartini and her husband, Bo, just moved into their FEMA manufactured housing unit last week. They plan to stay in it until they finish rebuilding their home.

“This wasn’t something we expected,” she said, giving me a tour of the place. “It was not something that we signed up for. I just went on and I registered with FEMA, so I’m not even sure how we were chosen.”

She said FEMA and state officials explained that the couple can live in the unit for 18 months, as long as they show progress rebuilding their house.

Cartini knows they’re lucky. They’d been living in a camper with no kitchen and no plumbing. But still she also feels guilty when so many people from Rockport have nowhere to stay.

“I know my neighbors are happy for us, that we did get it,” she said. “They were almost as excited as I was about it, but then it still comes back to: they were in the same situation, and I know that they are on the list and they are going to be getting a home, but it comes back to — when is it going to happen?”

Mayor Wax asked federal and state officials the same thing. Fewer residents in Rockport means he’s working with a smaller tax base, which means he’s running out of money for the city’s everyday needs: police, fire, waste disposal. He said he wouldn’t blame anyone who relocates and doesn’t move back to Rockport. After all, what can he tell them?

“Right now I have no place for you to live,” he said.

Texas officials tout that more than 400 families have been placed in temporary housing and that they’re getting more mobile homes into affected areas as fast as they can. They’re even bringing in RVs, which are easier to get and easier to place. But like Mayor Wax fears, if people have found jobs and enrolled their kids in school elsewhere, a temporary home may not be enough to lure them back to Rockport for good.