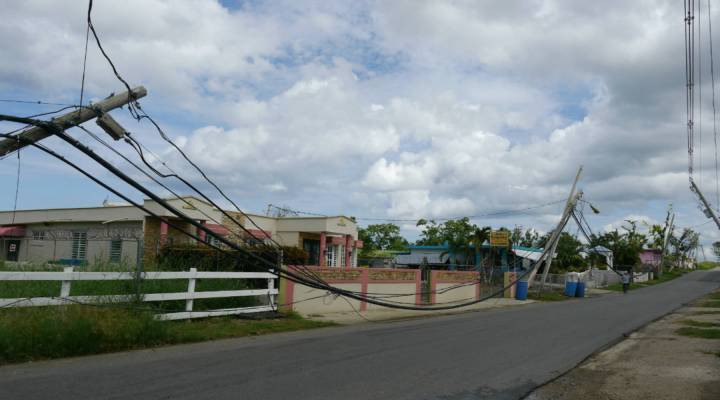 COPY
Downed power lines stretch along a street in Hatillo, Puerto Rico. Parts of the island are still without power. Joanne Griffith/Marketplace

Downed power lines stretch along a street in Hatillo, Puerto Rico. Parts of the island are still without power. Joanne Griffith/Marketplace
Listen Now

On a humid, buggy Friday evening in Puerto Rico’s Old San Juan, it’s quiet. A handful of tourists peek through the windows of closed stores while locals, like Joseph Saltero, are clustered in a bar.

“They have air conditioning and you want to watch TV. I mean, once I go home later, there’s nothing but heat and mosquitoes,” he said.

A few doors away, Reyes Hiraldo waits tables at an almost empty restaurant. “This is my first day back. We were closed because we didn’t have power.  I have two kids. It’s been very hard,” he explained.

It’s almost three months since Hurricanes Irma and Maria hit Puerto Rico. Every day since, people ask one question: “When will we have power?”

Col. John Lloyd is leading the U.S. Army Corps of Engineers’s mission to restore power to Puerto Rico. “It just is one of the most challenging missions that we’ve really faced, but it’s also the number one priority for the Army Corps, to get the lights on as soon as possible,” he said.

The Army Corps’s temporary home in San Juan is at the Puerto Rico Electric Power Authority. Back in May, the island filed for bankruptcy, owing bondholders $74 billion. More than $9 billion of that debt belongs to PREPA. This, said Lloyd, is slowing down power restoration to the island.

“In a lot of rugged areas, a lot of the maintenance for the access roads hasn’t been done for years. Just driving around, you see a lot of vegetation overgrown on some of the lines. That would be normal work that a utility company would be responsible for,” he said.

Right now, the Army Corps is responsible for about 60 percent of the restoration work in Puerto Rico, PREPA is responsible for the other 40 percent. Assistance is also coming from the likes of  New York’s Con Edison. As part of a mutual aid agreement, 430 of the power company’s workers will travel to Puerto Rico over the coming months. That’s different from the Whitefish energy contract that got so much criticism.

“When we were asked, we came right down,” said Johnny Price, a section manager with Con Edison.

Trucks and equipment were shipped, personnel arranged and within three weeks, a Con Edison team was in Old San Juan. There was a lot to learn, said Price, starting with a manual on Puerto Rico’s power system. “It was a 185 page book written in Spanish, so we had to figure out how to translate that and understand it and match it to our standards and understand what’s different,” he said.

Another challenge? Some buildings in Old San Juan date back to the 16th and 17th centuries and as a result power lines are on rooftops which, “is definitely new for us,” Price said. “In New York City, we don’t do that.”

Con Edison doesn’t have a dollar figure for what all this is costing them, or how many homes they’ve restored power to so far. For the U.S. Army Corps of Engineers,  they’ve received a  little more than $1 billion of federal money for this mission. It’s funding manpower and materials, with some of the money going to Puerto Rican businesses.

But when asked the all important question of when power will be restored, no one’s committing to deadlines yet.