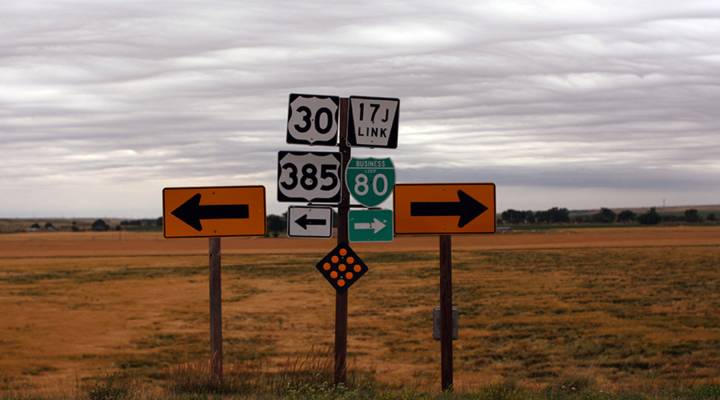 COPY
A view of the plains in Sidney, Nebraska. Spencer Platt/Getty Images

A view of the plains in Sidney, Nebraska. Spencer Platt/Getty Images
Listen Now

The Great Plains are loosing trees. Specifically, shelterbelt trees, which were planted during the 1930s at the behest of President Franklin Roosevelt to help farms suffering from dust storms. Now these trees are being cleared by farmers who want to use the land to plant more income-generating cash crops. Marketplace host Kai Ryssdal spoke with Carson Vaughan about his article on shelterbelts, reported in collaboration with The Weather Channel and the Food & Environment Reporting Network, a nonprofit investigative news organization producing stories about food, agriculture and environmental health.

Kai Ryssdal: Tell me what these shelterbelt things are? As I said, I’ve never heard this term before.

Carson Vaughan: Sure. Shelterbelts are basically synonymous with the windbreak or a hedge row. Basically there are a line of trees that help prevent blowing dust and dirt on fields out here in the Great Plains.

Ryssdal: And here we are now, 80 whatever it is years later, those shelterbelts are being cut down basically because the economics of farming have changed.

Vaughan: Yeah, that’s right. Essentially, whether you have a good year for commodities or a bad year for commodities, farmers are finding justification to rip them out. So, on a good year like in 2012 when we had $8-a-bushel corn, we wanted to plant every acre we possibly could. So a lot of farmers tore out the trees to plant a little bit more corn or a little bit more soybeans. You have a bad year, and a farmer looks at it and says, “I need every dime I can muster,” and so he tears out the trees again. It kind of works both ways. We’re stuck in sort of this strange conundrum.

Ryssdal: And these shelterbelts, I mean, they are known and recognized. In your piece, there’s a picture of a historical marker next to one. I mean, these are actual tangible things.

Vaughan: Yeah, that’s right. I mean, when FDR in July 1934 signed the executive order for the Forest Service to get moving on this project, it was a huge deal. Ultimately, they planted 220 million trees on 18,000 miles of windbreaks. It was, at that point, the biggest technical job the Forest Service had ever undertaken. So this was no small matter. And it really went a long way in helping farmers crawl back from the effects of the Dust Bowl.

Ryssdal: One of the things that happens when you run a farm today is, it’s really capital intensive right? It’s not just getting the crops in the ground and, you know, getting $8 a bushel for corn. You have to buy a combine for 100 and whatever it is thousand, probably more than that. I don’t know. I mean, it’s just capital intensive right?

Vaughan: Yeah, that’s right. And that’s another factor here on why we’re seeing these trees go away. You put in so much money purchasing these massive combines that are very, very expensive. You know, pieces of machinery are just much bigger than they used to be back in the day, and because of that we need to make room for those machines to run, and that often requires tearing out these old trees that once served a purpose and still do.

Ryssdal: You talk to the farmers and they say what about having to rip out these trees? Does it kill them? Or, are they like, “you know what? I’m going to make money, man.”

Vaughan: Well, I mean, it totally depends. I certainly don’t want to generalize. Some farmers still have that conservation ethic, but a lot of them are simply looking at the bottom dollar and they’re saying, “You know, even if I like these trees personally or have a sentimental attachment to it, they’re not making me the money that a few more acres of corn or soybeans would be.”