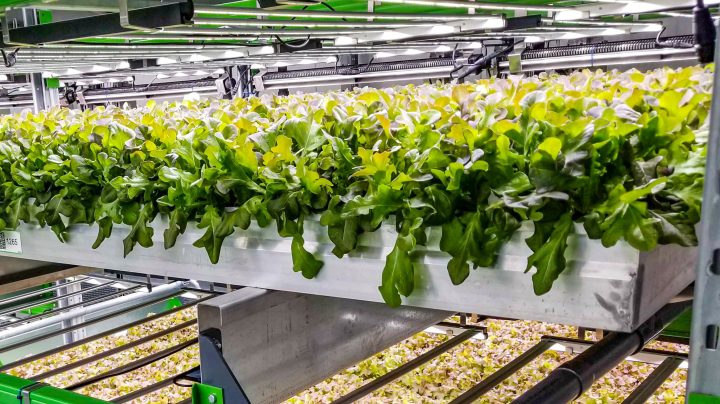 COPY
Bowery Farming has two vertical farms in the Northeast, with another under construction. "All of our supply chain exists in this one building," CEO Irving Fain says. Photo courtesy Bowery Farming

Bowery Farming has two vertical farms in the Northeast, with another under construction. "All of our supply chain exists in this one building," CEO Irving Fain says. Photo courtesy Bowery Farming
Listen Now

About half an hour outside New York City is a warehouse full of crops, all growing in trays stacked one on top of the other. The Kearny, New Jersey, farm is part of Bowery Farming, the biggest “vertical farming” company in the United States.

Irving Fain is the CEO of Bowery, which he co-founded in 2015. He gave “Marketplace” host Kai Ryssdal a tour of Bowery’s research and development farm, which features six layers of crops growing under lights that mimic the sun.

“Because of the way we grow in this controlled and contained way, we can grow 365 days of the year, independent of weather and seasonality,” Fain said. “Every one of our crops is getting all of the things that they need to grow and that they would get outside. And what they don’t have is all of the challenges with pests and the waste of water that happens.”

Bowery’s business model is based on growing crops in indoor sites located near the cities they sell in. Its leafy greens and herbs are available in more than 800 stores near the New Jersey farm and a second farm in Nottingham, Maryland. In part because of this proximity, Fain said, Bowery is “reinventing the entire fresh supply chain.”

“Crops like this take two to three weeks-plus to reach us normally,” he said. “Whereas all of our supply chain exists in this one building, and we deliver a product a day or two from harvest to when it reaches you as a customer.”

In the research and development part of the farm, Bowery’s team experiments with growing new produce, like radishes and strawberries, to add to its offerings. That’s also where they test crops to find flavorful strains that Bowery can grow because of both its regulated, indoor environment and its proximity to markets.

“If you think about outdoor agriculture, there’s essentially three things they care about when they choose what they grow: It’s gotta resist pests, it’s gotta resist droughts on the field and then it has to travel well,” he said. “If it doesn’t hit those three areas, it doesn’t matter. So taste, quality, variety — all these things go out the window.”

One vegetable Bowery grows because of its unique taste is wasabi arugula, which looks different from most arugula found at the grocery store.

“It’s a natural occurring crop, it’s just incredibly difficult to grow and germinate,” Fain said. “It’s something that you rarely would ever find outside in your day-to-day life, and it’s something that we’ve been growing consistently for almost six years now.”

Bowery has a third farm in construction, this one in Bethlehem, Pennsylvania. As the company continues to build more farms inside warehouses, Fain hopes to “democratize access to high-quality fresh food” in cities.