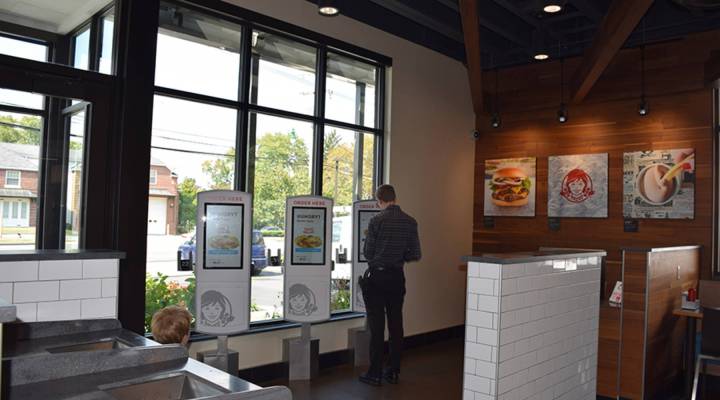 COPY
The Wendy's in the Clintonville neighborhood of Columbus, Ohio, has a flat screen TV, an outdoor patio, printed menus and electronic ordering kiosks. (Marielle Segarra/Marketplace)

Picture the inside of a fast food restaurant. Big menu board, plastic booths, those brown trays, sticky with ketchup from the last customer … the kind of place you get in and get out.

The Wendy’s in Columbus, Ohio’s, Clintonville neighborhood takes a different approach. Rajeev Sabharwal, an executive at Wendy’s, is standing on the restaurant’s outdoor patio, underneath a string of twinkle lights.

“We’ve got the heat lamps over here, we’ve got some real nice, comfortable couch seating sitting out here, so something like you’d see in your backyard,” Sabharwal said.

The restaurant also has printed menus, bar seating and an open kitchen.

Heather Pool is ordering a chicken sandwich from an electronic kiosk, although she considered the junior bacon cheeseburger.

“I’m trying to feel a little bit virtuous even as I’m eating at a fast food restaurant,” Pool said. She lives in the neighborhood and says she likes the new space. “This feels very welcoming and feels much more upscale,” she said. “It’s not plastic seats.”

Clintonville was one of Wendy’s first locations, opened in 1973. It reopened in March as a sort of living laboratory where the fast food chain can test its new store designs and get reactions from customers before rolling the ideas out to its more than 6,500 restaurants.

The lab is part of a bigger strategy at Wendy’s: to create a dining experience that will bring more customers into its restaurants. The redesigned stores, about a third of its North American restaurants, have fireplaces, TVs and free Wi-Fi. Sales at those locations have jumped between 7 percent to 10 percent on average. Overall, sales at Wendy’s restaurants grew less than half a percent last year.

Wendy’s moved away from all that in the ’80s. It switched to cafeteria seating and got used to people rolling through the drive-thru.

Pringle said that approach doesn’t work anymore. Grocery prices are falling, so it’s cheaper to eat at home. And there’s more competition now, with the rise of restaurants that fall in between fast food and sit down — chains like Panera.

“We very much look to what can we do to differentiate ourselves and really create a different experience,” Pringle said.

There is a risk to making your restaurant too comfortable, said David Donnan, a partner at AT Kearney. Ask any coffee shop owner.

“People spend two, three, four hours with just purchasing one cup of coffee,” Donnan said. He said for Wendy’s strategy to work, its new customers are going to have to spend money, too.