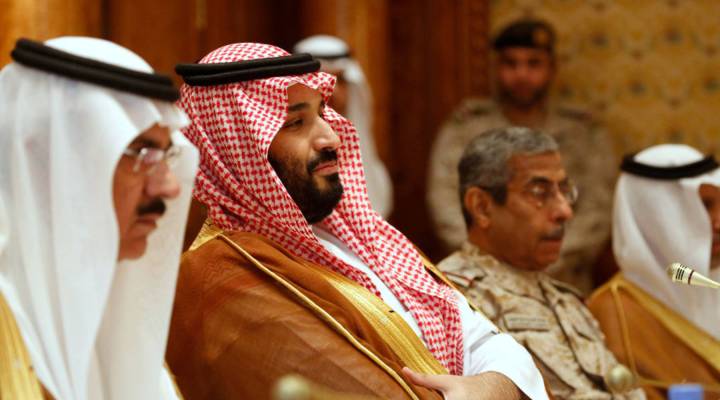 Over the weekend, Saudi Crown Prince Mohammed bin Salman arrested more than 60 people, including 11 other crown princes, in a corruption crackdown. This happens as the prince tries to usher Saudi Aramco, the national oil company of Saudi Arabia, into an IPO, all in an attempt to modernize the kingdom’s economy.

Last year, Bloomberg investigative reporter Peter Waldman went to Saudi Arabia to meet Crown Prince Mohammed bin Salman, who was then 31 and had a meteoric rise to power in Saudi politics. Marketplace host Kai Ryssdal checked in with Waldman after the anti-corruption efforts this weekend. The following is an edited transcript of their conversation.

Kai Ryssdal: This whole thing is being painted as an anti-corruption drive. You buying that?

Peter Waldman: Well, I think it’s mixed. There’s no question that they seem to have arrested a lot of people who have reputations in Saudi Arabia. This group, conveniently enough, included some outspoken people who have criticized the Prince, Mohammed bin Salman, and as well as those who’ve laid fairly low. So I do think it’s both. And I do think the prince has his eye on the younger population that is clearly unhappy with the way things are going in that country and would like to see a much more aggressive modernization push. And I think this is part of his appeal to them.

Ryssdal: When we had you on a year and a half ago or so, you had just come back from a day-ish with Mohammed bin Salman. And we talked about some of the economic challenges, I guess, he faces. One of those is the younger population, as you just mentioned. The other one is — and bigger, really — is diversifying the economy away from oil. Discuss that a little bit.

Waldman: Well, as we discussed then, and still now, they have this very ambitious plan to do a public offering of stock in Aramco, the national oil company. That could bring in, who knows, many hundreds of billions, into the trillions of dollars, that he wants to then recycle into non-oil investments so that eventually, they’ll have both external investments in companies all over the United States and Europe, but also so they’ll invest in Saudi Arabian companies and develop other natural resources besides fossil fuels, do other things to employ people there, which would be a huge boon if it ever worked.

Ryssdal: One of the other things, though, that that IPO, if and when it happens — and I should point out here that President Trump brought it up with King when they spoke this weekend — one of the things that IPO will bring is transparency and sunlight into the internal workings of the Saudi royal family and its finances, which has to be on Mohammed bin Salman’s mind.

Waldman: Clearly. Saudi Aramco, the oil company, is a slush fund for the royal family. The thousands of princes depend on oil revenue directly for their lifestyles. This is something of a warning shot to them, I believe, this corruption roundup, or anti-corruption roundup, saying to them, “Listen, your lifestyles are indeed threatened by what we’re planning to do in this kingdom, and you better not complain too much about it. We’re moving on.” So I do absolutely think this is all connected.

Ryssdal: One of the big names among the crowd that was arrested this past weekend is Alwaleed bin Talal. He’s a holder of, or has been owner of, Citigroup stock, and Ford, and Hewlett-Packard and Twitter. He is somebody in the world of international investments.

Waldman: He certainly is. I think Bloomberg ranks him in something like the 50th wealthiest person on the globe. We’re certainly not aware of specific allegations against any of these people, but particularly against him. On the other hand, the public has wondered for years both in Saudi Arabia and overseas, where did all that investment capital come from in the first place? So it could be an interesting file to open up.

Ryssdal: What are you looking for next out of this thing?

Waldman: I think we have to find out if this IPO is on track. That is the key question moving forward. Can he have that IPO and show the world that investors are confident in his management of Saudi Arabia? I don’t think that the instability this type of roundup presents will encourage a lot of these investors. I think there’s clouds looming today that perhaps are thicker than a week or two ago.