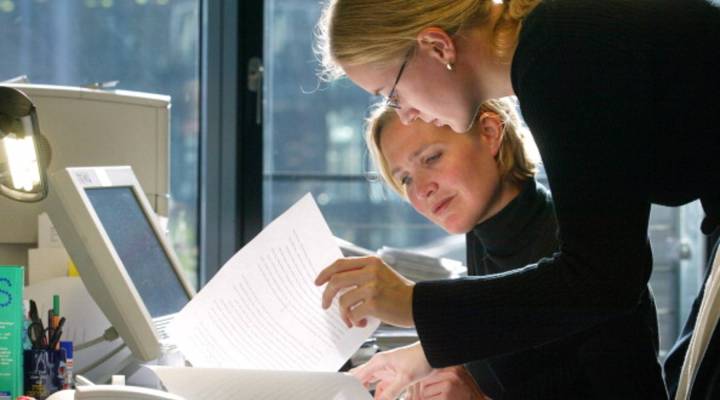 They are at it again. Millennials are breaking down yet another workplace taboo: talking about salaries. Americans 18 to 36 years old said they discuss their pay with their family, friends and co-workers, according to a new survey from The Cashlorette, a Bankrate company.

Workplace advocates have long been calling for greater transparency in pay, arguing that it would help expose pay discrimination based on gender and race.

“One reason that pay discrimination can flourish for years is because of a culture of secrecy around pay,” said Emily Martin, the general counsel and vice president for workplace justice at the National Women’s Law Center. “If you don’t know how much your co-workers are making, you don’t know if you’re being paid less than the equally qualified man doing the same job. When co-workers talk about the pay, it helps to chip away at that secrecy. Even if it’s just women talking to each other about how much they make, you probably won’t learn about gender pay disparities that way, but you probably will get a better sense of the market rate. That will make you better able to negotiate for yourself and — if you’re being paid less than market rates — to really make a case here where you should be paid more.”

Overall, women earn 83 cents for every dollar that men do, according to data released by the Economic Policy Institute earlier this year. The gender wage gap gets even more complicated when the data gets broken down by race. Consider that for every dollar paid to non-Hispanic white men:

Even though sharing salary information could benefit many workers, it is still considered a workplace taboo. Many people feel that talking about pay is rude and others find it embarrassing, according to Martin.

Some workplaces prohibit workers from discussing their pay with their co-workers, even though the National Labor Relations Act protect employees’ right to talk to each other about wages.

“Also, several states have explicitly passed laws that say employers can’t retaliate against you for talking with your co-workers about pay,” pointed out Martin.

Increasing transparency about pay has other benefits as well. Back in 2016, the Obama White House announced that it would require companies with more than 100 employees to report their employees’ gender, race and pay. The data was supposed to help determine if there was pay discrimination and then — hopefully — eliminate it. The initiative was delayed by President Trump, who claimed that the new rule would put too much burden on employers.

Another policy idea favored by the Obama administration was to prohibit employers from asking potential employees about their previous salaries. Such policy would be an important step forward for pay equity for women and other groups of people who tend to be paid less, said Martin.

“If an employer is basing your pay in your new job on how much you made in your last job, it means that if you experience pay discrimination that follows you from job to job throughout your career,” she said. “It just shouldn’t be the case that employers can say: ‘Well, yes, I pay these women less because these women were paid less before they ever got here. So it just makes sense for me to carry on that tradition.’ Obviously that doesn’t make sense. Prohibiting employers from relying on salary history in a pay-setting process helps assure that employers are focusing on the job and on the qualifications of the candidate and more rationally setting pay rather than allowing unjustified pay disparities to follow people from job to job in their career.”

There is currently no nation-wide law prohibiting employers from requiring past salary information. But, as federal rules pushing for equal pay have been stalled, state and local legislatures have been stepping in. Massachusetts banned employers from asking for salary history last year. Philadelphia did so this year. So did California. What’s more, California’s legislature also passed the Gender Pay Gap Transparency Act, which would require companies with more than 500 employees in California to report wages for their male and female salaried employees.