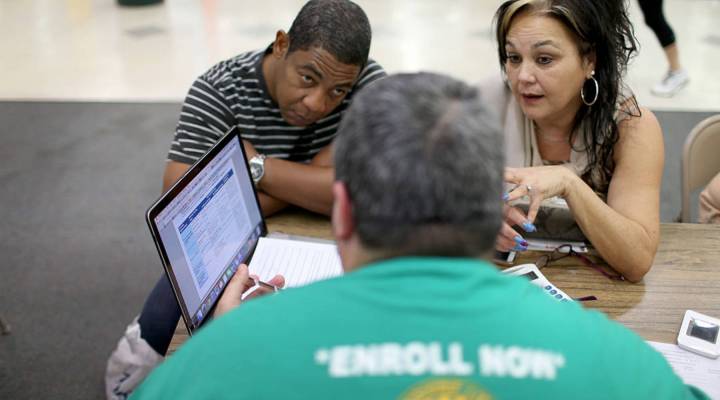 COPY
Jose Ramirez (L) and Mariana Silva speak with Yosmay Valdivia, an agent from Sunshine Life and Health Advisors, as they discuss plans available from the Affordable Care Act at a store setup in the Mall of the Americas on December 15, 2014 in Miami, Florida. Joe Raedle/Getty Images

Jose Ramirez (L) and Mariana Silva speak with Yosmay Valdivia, an agent from Sunshine Life and Health Advisors, as they discuss plans available from the Affordable Care Act at a store setup in the Mall of the Americas on December 15, 2014 in Miami, Florida. Joe Raedle/Getty Images
Listen Now

President Donald Trump predicts “millions and millions of people” will benefit from his action to unwind the health care law.

But the changes Trump hopes to bring about could take months or even longer. That’s according to administration officials who outlined the order for reporters Thursday morning. The proposals may not be finalized in time to affect coverage for 2019, let alone next year.

Trump signed the order in the White House’s Roosevelt Room surrounded by Vice President Mike Pence, members of his Cabinet and Congress.

The president says the order will provide what he calls “Obamacare relief” for millions of Americans.

Trump is relying on the executive order because the Republican-controlled Congress has been unable to pass a plan to repeal and replace the Obama-era health care law.

Trump says the health care system “will get better” with his action, and the action will cost the federal government nothing.

The president says he still wants Congress repeal and replace the Obama health care law. But his says his order will give people more competition, more choices and lower premiums.

President Donald Trump has made no secret he’s frustrated with the failure of Congress to repeal and replace “Obamacare.”

Now Trump will try to put his own stamp on health care with an executive order that aims to make lower-premium insurance plans available to more consumers. He will unveil his plan Thursday.

Administration officials say it will let groups and associations sponsor coverage that can be marketed across the land, reflecting Trump’s longstanding belief that interstate competition will lead to lower premiums.

Trump’s move is likely to encounter opposition from medical associations, consumer groups and even insurers _ the same coalition that has blocked congressional Republicans. They say it would raise costs for the sick, while the lower-premium coverage for healthy people would come with significant gaps.