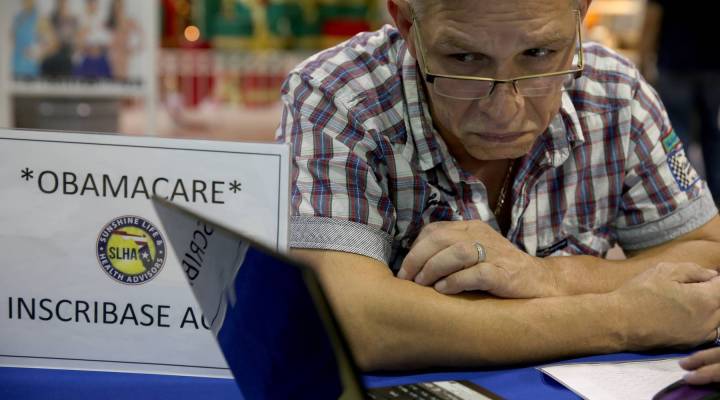 COPY
In 2018, some healthcare premiums might go up by as much as 50 percent.  Joe Raedle/Getty Images

In 2018, some healthcare premiums might go up by as much as 50 percent.  Joe Raedle/Getty Images
Listen Now

Several states have announced rates for health insurance premiums on the Obamacare exchanges for 2018. Topping the list is Georgia, with rates that are 57 percent higher than last year, while Florida said some premiums will be 45 percent higher.

Among the reasons for these increases is the uncertainty about the future of the Affordable Care Act. President Donald Trump has vowed to repeal and replace the health care law, which was passed under his predecessor President Barack Obama. Congress had repeatedly tried and failed to deliver on President Trump’s promise.

Insurers are raising premiums in the face of repeated threats from President Trump to stop funding so-called cost-sharing reductions, payments to insurers that cover out-of-pocket costs for some low-income consumers. Trump previously referred to these payments as “bailouts” for insurance companies and threatened to stop making the payments so as to “let Obamacare implode”.

If a new HealthCare Bill is not approved quickly, BAILOUTS for Insurance Companies and BAILOUTS for Members of Congress will end very soon!

“This has been the most unstable and challenged health insurance market in my tenure as a public servant,” Dave Jones, California’s health insurance commissioner, told the Los Angeles Times earlier this week. “The degree of uncertainty and instability that the Trump administration has injected into the market this year cannot be understated.”

To set premiums, insurers estimate how many people they will cover and what that will cost. With the $7 billion in Obamacare subsidies up in the air, insurance companies struggle to do the math. They worry that without the subsidies, their policies could be too expensive and fewer people would buy them. If fewer people are expected to buy insurance, insurers will need to hike their premiums.

“We’re all pricing up for it,” Dr. Martin Hickey, the chief executive of New Mexico Health Connections, told the New York Times.

If the Trump administration does not end up getting rid of the subsidies and premiums go up, some consumers could end up getting better deals. The subsidy that helps cover insurance premiums depends on income and the cost of silver plans in a person’s region. And since the price of some of those silver plans are spiking, the subsidy will be bigger this fall.

The Kaiser Family Foundation’s Larry Levitt said that extra money means consumers could shop for more than just silver plans. “Instead you use it to buy into a bronze plan with a higher deductible or a gold plan with a lower deductible, there could be some great deals out there,” he explained.

The question is: will consumers even know about the bigger subsidies? The Trump administration slashed its Affordable Care Act outreach budget by 90 percent.

Former Healthcare.gov chief marketing officer Josh Peck is now co-founder of a new advocacy group, Get America Covered. His organization said the message doesn’t change. “The line we’ve used for the last three years has effectively stayed the same which is, most consumers can find plans for between $50 and $100,” he said.

While this may be good news for individual consumers, the potential bigger subsidies mean more tax money going to fund Obamacare.

Correction (Oct. 5, 2017): An earlier version of this story misspelled Larry Levitt’s name. The text has been corrected.