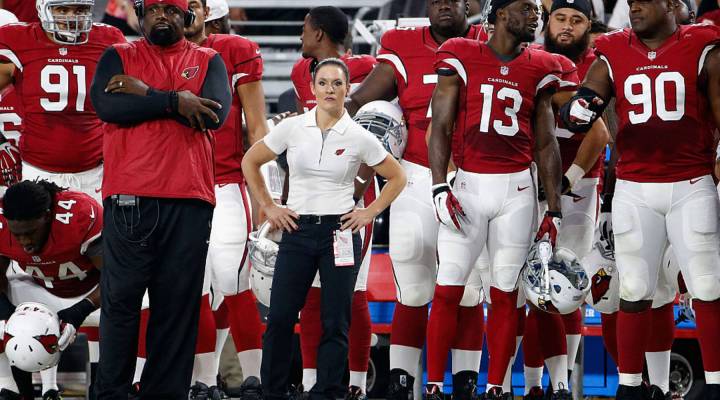 COPY
Jen Welter worked in the NFL as a coach for the Arizona Cardinals. Christian Petersen/Getty Images

Jen Welter worked in the NFL as a coach for the Arizona Cardinals. Christian Petersen/Getty Images
Listen Now

Since she was a child, Jen Welter has loved sports. She started off with tennis lessons but eventually landed up in women’s pro football and then famously became the National Football League’s first female coach. She details the story of her career in the new book, “Play Big: Lessons in Being Limitless from the First Woman to Coach in the NFL.” Welter talked with Marketplace host Kai Ryssdal about her book and women in sports. Below is an edited transcript of their conversation.

Jen Welter: I was playing flag football on weekends. The league actually got a call from the general manager of the Mass Mutiny at that time, and she asked if any of the girls playing flag could play tackle. Of course, they got my name, and I went to an open tryout. When I made it, I promised myself simply that I would step up to whatever challenge the game put in my way.

Kai Ryssdal: Well, one of those things was a  semi-pro sports league in which, I think, you made, like, what? Twelve dollars a season or a game or something? I mean … you had to have a day job, I guess is the point.

Welter: Absolutely. You know, and that’s unfortunately, that’s the state of women’s football to this day. You know, the owners have the best of intentions, and they are doing their very best to give women the opportunity to play. But with no big sponsors and all of those things, you’re really relegated to a whole lot of fundraising, a whole lot of ticket sales, everything that you picture of maybe a high school team doing. As I say, we got a check for $12, and that was the first check I ever made for playing women’s pro football, and that was my fourth season, and it was the first season when I won a Super Bowl.

Ryssdal: Let me take a detour here into the idea of women’s professional sports in this country. The WNBA, I’d say, has to be probably the most successful female league. There is and has been women’s soccer, and then it kind of falls off the table, right? … I’m talking team sports. So what’s the answer then for women like you who want neither of those two more popular sports? What do you do? How do you sustain that interest and that pipeline then of finding women and younger girls to come on?

Welter: They used to say that football was the final frontier for women in sports. The challenge is keeping them in the game for a long time when the sacrifices start to challenge the ambition that goes along with challenging the status quo. We talk all the time about the need for equal pay for equal work, and I know it’s very controversial that on average, women make 78 cents to $1 of what men make. Well, let’s talk about $1 to a million. There’s no place it’s more pronounced than in sports.

Ryssdal: You did spend some time in the NFL with the Arizona Cardinals. When you got there, did you think you’d made it? I should say as a coach, by the way, you weren’t playing, you were coaching at that point.

Welter: I think it was so surreal to me to really be there. I had one goal in mind and that was to be the first and not the last. To make sure that we set an example for everyone that not only was this possible, but that it was a good thing, because I was very aware if one thing had gone wrong, then it closes a door tighter than it had ever been closed before.