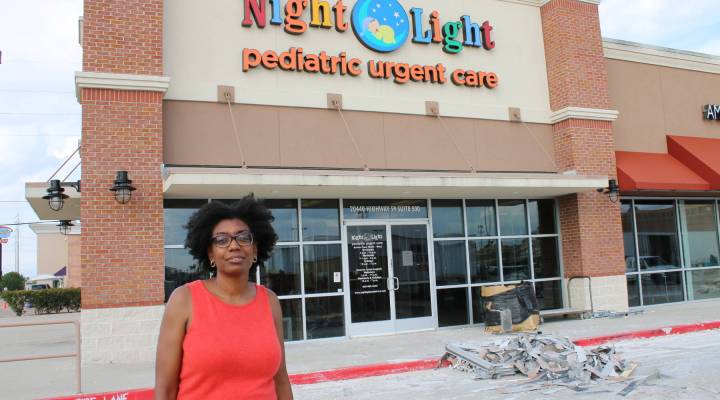 COPY
Anastasia Gentles, co-founder of NightLight, stands before the storefront of the north Houston branch, which was flooded. She says she still has to turn customers away all the time.  Florian Martin/ for Marketplace

Anastasia Gentles, co-founder of NightLight, stands before the storefront of the north Houston branch, which was flooded. She says she still has to turn customers away all the time.  Florian Martin/ for Marketplace
Listen Now

Houston is still recovering from Hurricane Harvey, which dumped a lot of water on the city as a tropical storm. The flooding affected a large number of small businesses, which make up the vast majority of Houston companies.

At NightLight Pediatric Urgent Care near Bush Intercontinental Airport, workers have stripped the office to nothing but its stone walls, glass windows and metal frames.

When Harvey hit, the strip mall where the office is located quickly turned into a lake. “We have a camera, so we were watching,” NightLight co-founder Anastasia Gentles said. “And at first it was, like, ‘Oh, it’s OK, it’s just a flow, we can handle it.’ And then two hours later I was, like, ‘OK, it’s done.’”

She said reconstruction will probably cost more than $300,000. The company has flood insurance, which should cover most of it. But Gentles said this was the busiest of seven branches, accounting for a quarter of the company’s revenue. And it’s taking a long time to rebuild, in part because contractors have been in high demand after Harvey. “Because you can’t even find a pod in this city right now,” Gentles said. “We had to rent a U-Haul, so we had to pay for a U-Haul to sit in the parking lot with our cabinets in there.” She estimates rebuilding will take three to six months. She’s trying to find a temporary location nearby.

Harvey hasn’t just affected those businesses that were flooded. “A lot of the businesses we work with are restaurants or service industries,” Steve Lawrence, executive director of the University of Houston’s Small Business Development Center, said. “And a lot of things stopped for a week or two, so everybody’s been affected in one way, shape or form.”

So what has Harvey done overall to small business productivity in Houston? “What we saw was that while there was a pretty dramatic initial decrease in average revenue for local businesses, things rebounded actually fairly quickly, which was not what we expected,” said Brad Plothow with small business software company Womply.

The company’s researchers looked at credit card transactions for nearly 6,000 Houston businesses before, during and 10 days after Harvey. They found that daily revenue returned to 80 to 100 percent of its pre-storm level within a week. Plothow said it helped that many Houstonians have gone through similar disasters before, and were therefore prepared.