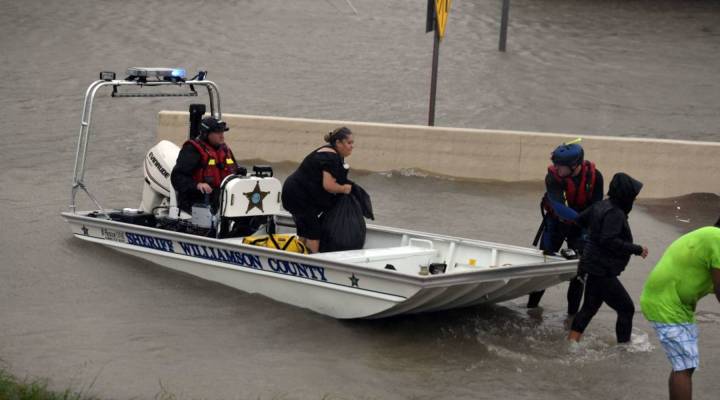 When Hurricane Harvey made landfall on August 25, it was the strongest hurricane to hit the U.S. in 13 years. Texas, where Harvey came ashore, had not seen a hurricane so fierce since Hurricane Carla, the most powerful Texas hurricane on record, in 1961 according to the AP. Now, days later, much of Houston is still underwater.

Houston is the fourth most populous city in the U.S. with a population of more than two million people. The metropolitan area is sprawling and is larger in size than the entire state of New Jersey. As Harvey made landfall and was downgraded to a tropical storm, the rain and calls for help kept coming. With residents trapped in their homes and water constantly rising, Houston emergency center processed 75,000 calls between Friday night and Monday morning, local officials told CBS.

With long hold times, many of the trapped residents turned to social media for help. It got to the point where the Houston Police Department issued a statement urging people to please not contact its social media accounts for rescue requests.

There was one other way to request help: by texting 911.

However, according to Joe Laud, the administration manager at the Houston Emergency center, text-to-911 “didn’t see too much activity” over the past few days. Compared to the tens of thousands of calls, the center received just a handful of texts.

In August 2014, the Federal Communications Commission ruled that wireless carriers and other text messaging apps in the U.S. were required to deliver text messages to emergency call centers that accepted them. Houston had rolled out its text-to-911 program years ago, but few residents have yet to give it a try.

The text-to-911 program uses fairly new technology that has been around for just three to four years, according to Trey Forgety, director of government affairs at the National Emergency Number Association. The implementation of the services are individually funded by the local emergency centers resulting in a slow roll-out, on a county-by-county and city-by-city basis. So far somewhere between 20 to 25 percent of 911 centers have rolled out text-to-911 programs. For example, in Texas, the services are available in the Houston metropolitan area but not in Austin.

The ability to reach emergency services via text message was designed with particular situations in mind — such as domestic disputes or while being held hostage, when calling 911 might put the person requiring help in danger. It’s also designed for those who are hearing and speech disabled. However, the program could come in handy during emergencies such as Hurricane Harvey.

“There might be circumstances where a cellular network is not operating at its maximum capacity. In those cases, sometimes, text messaging can be the last, best, lifeline that let’s you get through to 911 if your local 911 center supports it and the network is up just enough to carry a text message,” Forgety said.

“What we’ve found over time is that it actually does help when you have network impairments such as a large event. It doesn’t have to be a disaster. You can have something like a presidential inauguration where networks are really overwhelmed and texts can be the last thing to get through.”

How texts-to-911 are received and answered is up to each 911 center, Forgety explained. Some choose to have the same dispatchers answer both calls and texts while other centers could have a specialized dispatcher who is only responsible for working with incoming emergency text messages.

There are however, some downsides in using text-to-911 technology. For one, text can take longer to type than speaking on the phone. They are also slower to be delivered, according to emergency officials. However, once they are received, the response time is “roughly the same” as with emergency phone calls, Forgety said.

According to Forgety, in the case of Houston, the problem was not with infrastructure but with the volume of calls, which result in long wait times. One ways that NENA hopes to solve this in the future is by transitioning 911 services from the “aging” telephone system infrastructure onto modern IP-based networks.

“Right now when one 911 center is affected by a disaster, it’s very difficult to get their calls or their overload transitioned to another center. Next gen 911 will let us to do that much more easily and improve service to the public,” Forgety said.

This is exactly what is not happening in Texas.

“One of the biggest problems that our members are facing right now is that there are simply too many calls to be answered. There are not enough people in these centers to handle the influx of calls and moreover they might not have enough phone lines to handle as many calls as come in at one time,” he said. “The big thing for us is making sure that our members in the affected areas are supported. These are folks who are working almost 24 hours a day at this point, who might have lost their own home, might have lost their own businesses and so forth.”

By making sure that such calls can be redistributed to other centers in the future, NENA would be able to give these emergency center workers a break.