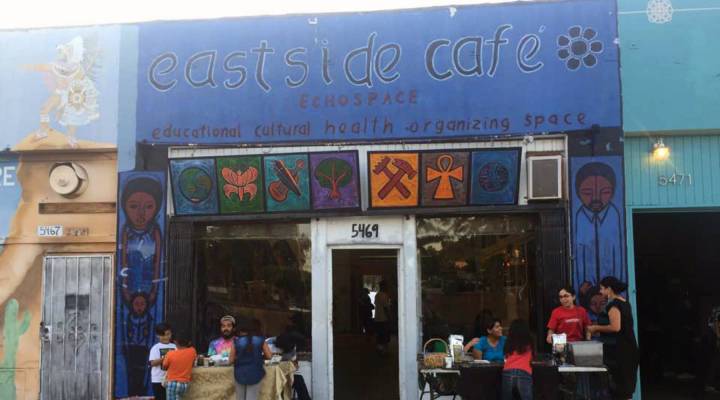 COPY
The Eastside Café in Los Angeles doesn't sell coffee yet, but it's hosted community events and classes for 15 years. Aaron Schrank/Marketplace

The Eastside Café in Los Angeles doesn't sell coffee yet, but it's hosted community events and classes for 15 years. Aaron Schrank/Marketplace
Listen Now

As the Eastside Café in Los Angeles’ El Sereno neighborhood welcomes visitors for an art exhibition on a recent evening, Roberto Flores motions to the donation jar on a table out front.

“By the way, we don’t charge here, for anything,” he said.

There’s no coffee in sight, because this place isn’t really a cafe. It’s a community organizing space inspired by the Zapatistas, a Mexican indigenous revolutionary group whose art hangs on the walls tonight.

The Eastside Café has been here for almost 15 years, hosting everything from English and jiu-jitsu classes to a healing circle and folk music collective. It’s all focused on renewing the communal identity of this 80 percent Latino neighborhood.

“We are in favor of reconstructing our community,” Flores said. “The flip side of that is that we don’t like gentrification, we don’t like displacement.”

“I started to feel like that’s probably going to hit El Sereno soon,” Angela said. “And I could see it in the residential areas where there’s a lot of these restorations and “for sale” signs on people’s homes.”

This May, those gentrification forces came knocking on the Eastside Café’s door. The group discovered a strip mall developer had begun the process of buying the building they rent from for $1.2 million. When the buyer came by for a walk-through, Roberto said they confronted him.

Roberto said the group made an impression on the buyer.

They figured they needed about $200,000 for a down payment. No one person had that kind of money, but Roberto had always dreamed of the community itself owning the place. So he put the word out for contributions. The next day, musicians Aloe Blacc and Maya Jupiter gave $60,000 to the cause.

“There are other buyers waiting in the wings,” Blacc warned in a Facebook video urging others to donate. “A developer wants to buy the building, and the Eastside Café has nine days to get ahead of it.”

More money started coming in. By the time the 10 days were up, they’d raised $120,000, enough to open escrow on the building and get the other buyer to walk away.

They’ve since raised $160,000, and are on their way to owning the building. It’s been all hands on deck.

“We’ve kind of had to learn a lot really fast about real estate, and we’ve been reaching out to people like lawyers and foundations,” said Eastside Café regular Nati Carrera. “So we’ve kind of really ramped up our knowledge base to purchase the building.”

There’s one irony here. With six other storefronts in the building, Flores and the anti-capitalist Eastside Café will be in the awkward position of being landlords.

“We want to make sure that we are able to sustain this place, and not have to raise rents in a shocking way that is going to displace people,” Roberto said. “The whole effort is against gentrification, so we need a lot help.”

To bring in some revenue, the Eastside Café will finally start selling coffee — Zapatista-grown coffee from Chiapas, Mexico. But Angela Flores said this cafe won’t be like the hip coffee shops opening nearby. 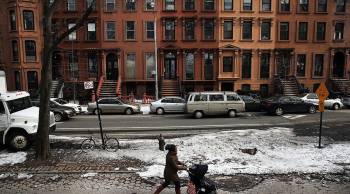 How has money changed your community?