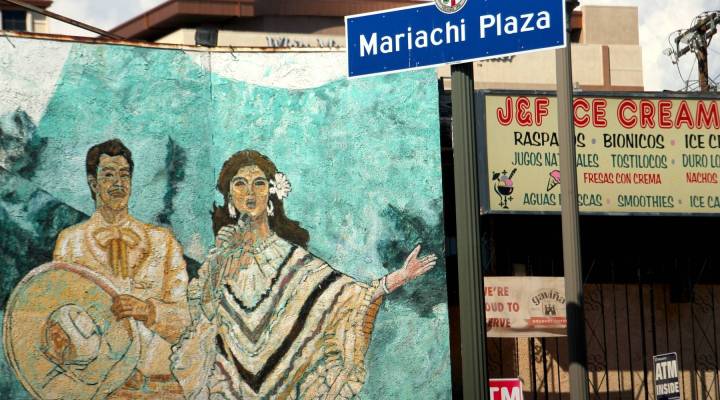 COPY
Mariachi Plaza and the larger Boyle Heights neighborhood have become the focal point for gentrification in Los Angeles.  Katherine Garrova/ for Marketplace
Way of life

The sun was setting in Los Angeles as a mariachi band took to the streets in protest.

They performed a few staples on foot, leading demonstrators to what’s known as Mariachi Plaza. For more than half a century, the space has been a meeting ground for mariachi musicians. It’s a cultural spot in Los Angeles — a setting where these musicians live, work and have roots going back generations.

Mariachis like Luis Valdivia, who explained why he was there. “The rent has gone up for some 60, 70 percent. For us it has gone up 80 percent,” Valdivia said.

For Valdivia, who’s lived here for more than 20 years, that means his rent had increased by $800 a month. Valdivia makes a modest living here, usually charging about $300 a gig (to be split between him and his band). He notes wryly that he can’t afford to live in the place named for his profession.

“It’s ironic,” Valdivia said, “that it’s in a community where we, the mariachis, live all around this entire area. And for example in our case, where they increased the rent by such a high amount. Well, if we can’t pay then we’re going to have to leave and live somewhere where we can pay.”

“This is their life,” Tenorio said. “This is their way of life. And so, we’re starting to strip that away if these folks are priced out.”

Mariachi Plaza and the larger Boyle Heights neighborhood have become the focal point for gentrification in LA. Located near the now posh Arts District and with a relatively new metro stop, the gears of gentrification are already moving.

Scenes in Boyle Heights. Left to bottom right: A mariachi storefront, a musician and street art.

But with a history of activism going back decades, Boyle Heights residents are putting up a fight. When a new coffee shop with a trendy aesthetic called Weird Wave opened up, there were protests. And one night Weird Wave had a window smashed. Mario Chavarria is part owner of Weird Wave.

“It seems a little bit out of context,” Chavarria said. “I mean, we could have invested in flipping real estate and instead we invested in a coffee shop that’s probably going to take many years to get a return. We don’t feel that we are gentrification or we are gentrifying the area.”

Urban planner James Rojas knows the area well. He was born in a hospital that you can see from Mariachi Plaza. Rojas has a theory that, as neighborhoods like Boyle Heights become more affluent, the micro-economy shifts from one of production, to one of consumption.

“I think it’s the production part that makes it sustainable and enduring,” Rojas said. “You know, a Latino sees this place as, ‘I’m gonna go sell tamales on that corner and make money and survive here.’ Where a hipster might say ‘I’m gonna come here and play — hang out and have my cup of coffee.'”

Playwright Josefina Lopez has been producing in one form or another in Boyle Heights for decades. She wrote the screenplay for the 2002 film “Real Women Have Curves.”

“What’s infuriating is that, the history of Boyle Heights is that a lot of us were forced to live here. It was the ghetto, right. [That] was the way it was viewed,” Lopez said. “And once we’ve made it beautiful, people go, ‘Oh yeah, let me take it from you now.’”

Lopez and her husband run a non-profit community theater in Boyle Heights called Casa 0101 and as of this year, a restaurant, Casa Fina, which she said she wants to keep affordable for people already living in the neighborhood.

Josefina Lopez at her community theater, Casa 0101, in the Boyle Heights neighborhood of Los Angeles.

Sanchez is writing a book about Boyle Heights and, for him, much of the gentrification dilemma here and elsewhere comes down to one thing: affordable housing.

“You know, we have to ask  ourselves, ‘Do we want to become a San Francisco?’ Where a regular teacher in the K-12 system cannot live anywhere near a San Francisco public school?” Sanchez said.

Back at the protest at Mariachi Plaza, the band played on. Today at least, the music more rallying cry, than requiem for a tradition lost.