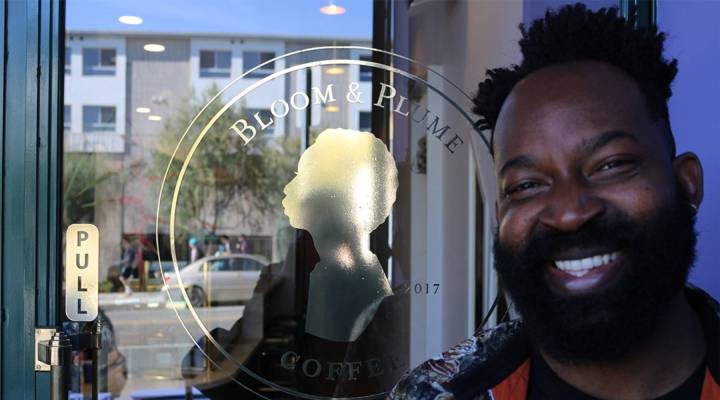 Gentrification is a common story in many urban areas: Businesses move into a neighborhood, property values go up, and things start to get more expensive for the people who lived in the neighborhood to begin with. According to a study from the National Community Reinvestment Coalition, gentrification has historically happened at a much faster rate in the country’s largest cities — Los Angeles included. Maurice Harris, the owner of Bloom & Plume Coffee, started his business in response to some of changes he was seeing in his Los Angeles neighborhood. Harris tells the story of how he tried to get his new cafe up and running.

My name is Maurice Harris and I am the owner of Bloom & Plume Coffee located here in Echo Park in Los Angeles, California.

I’ve lived there for 15 years. I’ve seen rapid change happening in the neighborhood, buildings going up left and right. And I was just like, my neighborhood is changing, and I can either be a part of the solution or just complain about it. My first business, which is flowers, is an extremely luxurious business. Our opening price point for arrangements is $200, plus delivery. I mean, I can’t afford that, and I own the business. Then I was thinking, OK, but like, a $5 latte, that’s approachable.

My brother came aboard and was like, I think this is actually a good idea. And he started a whole business plan that was flawless and beautiful and amazing. I mean, I’m saying that, but, like was it? I think it was, actually.

Now, nobody tells you, like, your business plan is just a plan. When you get into reality, and you bust open walls, and the city and the health department and building and safety come through to do their inspections, you have no idea what they’re going to say or what’s going to happen. And so whatever your business plan is, you should probably have at least 40 percent more resources available to you because your project is never even kind of gonna come close to what you think it’s going to be.

The biggest frustration of the whole project was the electricity. The city required us to upgrade the whole building, not just our space. That came with an 11- month delay, just right there. Period. No answers. Stop project.

We were supposed to open up December of 2017. Then we were supposed to open up winter of 2018. And then it was supposed to be April. I was very conscientious about wanting the space to be a place where everybody can go, and everybody can afford it. But with an 11 month-delay, what happens to your price point of what you’re selling? It immediately has to go back to the customer, because now we have these loans to pay, we have all these employees to pay, and our reserve has just, like, literally been deleted by that 11-month delay. We want our price point to be engaging so that everybody feels like, wow, this is of good value. It’s not just like some fancy place that forgets about all the people that are here. But that has been a really, really, tricky equation to figure out, because of money.