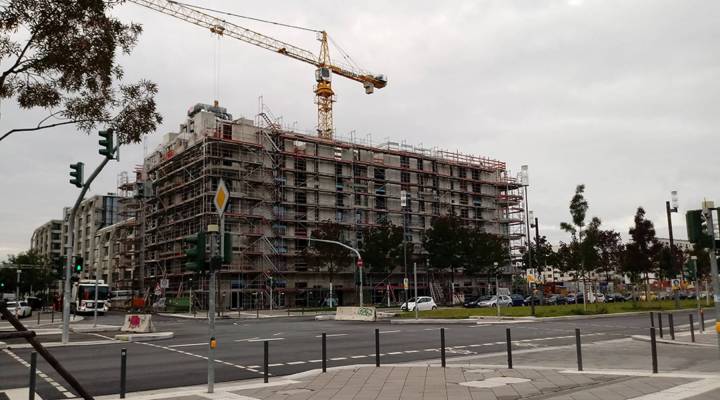 COPY
Europa Allee, a broad avenue in the center of the city, is one likely destination for the Brexit bankers. Luxury apartment blocks, hotels, shops and leisure centers have been springing up there for more than five years. Stephen Beard/Marketplace

Europa Allee, a broad avenue in the center of the city, is one likely destination for the Brexit bankers. Luxury apartment blocks, hotels, shops and leisure centers have been springing up there for more than five years. Stephen Beard/Marketplace
Listen Now

In a cozy little restaurant called VIF, on the edge of Frankfurt’s financial district, the young owner Luise Hoepfner makes herself a cup of coffee and relaxes after the lunch time rush. Hoepfner is rather pleased with herself. She took a gamble opening her restaurant a year ago. Now she believes it will pay off, thanks to Brexit.

“I think for me it will increase demand. More people. More business. More money. The Brexit will be good for us,” she said. “If a lot of banks now based in London move their operations to Frankfurt, I think this will prove to have been the perfect time to invest in this city.”

No one knows for sure how many bankers will flee London after Britain leaves the European Union. Everything depends on the sort of deal the U.K. is able to cut with its European partners before the deadline of March 2019 and whether it will be able to retain the right for the banks based in London to continue operating freely throughout the EU.  If the U.K. loses that right, Frankfurt city officials say, as many as 10,000 London-based bankers could relocate to the German financial center.

Some local businesses report signs of a possible gold rush.

“We’ve seen a big increase in inquiries from London clients looking for upscale properties,” said Olivier Peters, owner of the Sotheby’s real estate franchise in Frankfurt. “And sellers are pushing up their asking prices. We have sold some villas that were, maybe, 10 to 15 percent overpriced but we sold them quite quickly. We can’t say for sure that was because of Brexit but these properties sold much quicker than before the Brexit referendum.”

Deutsche Bank – whose twin towers dominate the Frankfurt skyline – reckons that the city’s real estate prices overall are up 11 percent since the British government triggered Article 50 of the Lisbon Treaty at the end of March and started the Brexit process.

Some local residents are starting to worry.

“People who live now in Frankfurt fear very strong that the property prices will go up and up and they will have no more chance to live in Frankfurt,” said Festus Meyer, an office worker. He pointed out that there’s already an acute housing shortage in the city and said that Frankfurters of modest means will be forced out to make way for the much wealthier incomers.

“It will change the atmosphere. It will change some parts of the city of Frankfurt here.  The gentrification will start. We don’t want that,” he said.

Europa Allee, a broad avenue in the center of the city, is one likely destination for the Brexit bankers. Luxury apartment blocks, hotels, shops and leisure centers have been springing up there for more than five years and, critics say, it gives a foretaste of what will happen to the fabric of the city if many more finance workers arrive. Several hundred people have already moved into Europa Allee but, according to Tobias Schmitz of the MHM housing campaign group, it doesn’t look or feel like a community.

“We don’t see many people around here. It’s pretty grey and it’s sterile. No life at all. It’s dead. It’s like a ghost town,”  he said.

Schmitz said that the financial workers who live there, only use the place to crash at the end of the day. They have no interest in putting down roots.

“It’s a very fast business. People want to make money in a few years and then move somewhere else,” he said, adding that he’d prefer it if the Brexit bankers went to Paris instead.

Frankfurt officials said the city would be mad to reject the economic benefits that would flow from London-based banks shifting their operations to the German financial hub:  80,000 local jobs could be created; more than $200 million a year in extra tax revenue could be generated.

And not everyone is unhappy about the possible banker influx. “With more bankers coming in, the higher tax revenue will improve not only Frankfurt but the whole region,” said Robin Ladwig, a student. “My comment on the bankers is: come over here! You’re welcome! The more the merrier!” enthused Saman Danandeh, another student.

But it must be said – the subject that both Ladwig and Danandeh are studying is … finance.