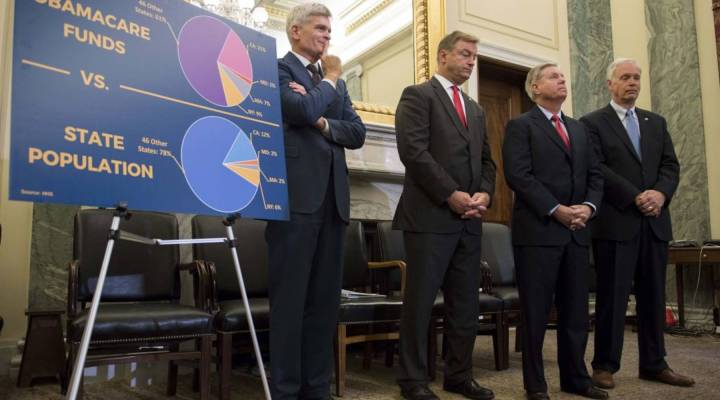 The latest attempt to repeal the Affordable Care Act comes up for a vote in the Senate next week. The Cassidy-Graham bill calls for taking the money the federal government spends on Obamacare and doling it out to the states in block grants. States then call the shots on how the money is spent.

“A block grant is a lump sum of money that doesn’t change as the number of people might change, or as the per-unit cost of whatever it is you’re buying changes,” said Sara Rosenbaum of George Washington University.

She said that type of funding works fine when it comes to something with a fixed cost, like building a bridge or re-paving a highway.

“For health care, however, where the block grant is for a good or a service, that goes up quite significantly faster than the general rate of inflation, that’s certainly a challenge,” Rosenbaum said.

In the Graham-Cassidy bill, block grants will mean fewer people have health insurance than do under Obamacare, especially in states that expanded Medicaid. According to a new analysis by health policy firm Avalere, 34 states would get less money under the plan. Georges Benjamin, with the American Public Health Association, said this brings to mind another controversial block grant program: welfare reform.

In the 1990s, welfare dollars were doled out based on need, Benjamin said. “Now many welfare dollars go out in blocks of money and they often don’t meet the need,” he said.

For their part, advocates of block grants also turn to welfare reform — as evidence that block grants can work.

“Welfare reform used a block grant formula and as a result some states were able to make changes to their welfare programs that reduced the number of people on welfare,” said David Howard with Emory University.

That’s the big selling point for block grants. States get to decide how to spend the money. Even if they get less of it.