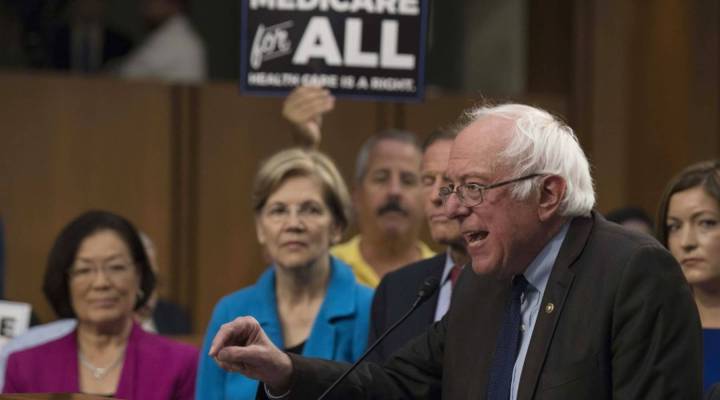 Bernie Sanders’ new bill in the Senate calls for an overhaul of American health care. The Medicare for All Act, introduced today by the Vermont Democrat, proposes a single-payer system. Marketplace host Kai Ryssdal spoke with Sarah Kliff of Vox to get an explanation of what exactly single-payer means. The following is an edited transcript of their conversation.

Kai Ryssdal: Tell me, would you, what single payer means?

Ryssdal: And the payer here is then the government, right?

Kliff: Exactly. So when we talk about single payer, we’re really just saying the government is paying for everybody’s health insurance.

Ryssdal: OK. How are they going to do that? They’re going to raise taxes or what?

Kliff: That is a great question. The Sanders bill lays out some options for how to finance it, but it doesn’t say two key things. First, how much is this going to cost? How much it costs to get everybody health insurance. And second, which options they prefer. So right now, Sanders has a pretty comprehensive look at what benefits he wants his health insurance plan to cover but very little detail on how to pay for that plan.

Ryssdal: One does imagine though that taxes are going to have to go up somehow.

Kliff: Yeah, and I think the case that Sanders would make is that, you know, we will no longer be paying the premiums we currently pay to our private insurance, that it will change who we’re paying. But a lot of middle class Americans wouldn’t necessarily be paying more. But you’re right, Kai, that taxes are definitely going to have to go up. There’s really no way to build a big government health insurance company without doing that.

Ryssdal: To be explicit here, this means the health insurance that you and I get through work, that goes away, the Obamacare exchanges, that goes away or some — they go away as we know them now.

Kliff: Yeah, that’s right. So also Medicare, Medicaid, they all sunset for years after this bill passes, and we all move into something totally new that doesn’t exist yet called universal medicare. So we would no longer, you know, you would not have the marketplace plan, I would not have the Vox plan, those would cease to exist under the Sanders plan.

Ryssdal: We know that this faces, I guess we could fairly say, extremely long odds in the Congress of the United States. What do you know about how the population at large feels about it?

Kliff: We know that public opinion generally tilts in favor of single payer, but it’s very malleable. It’s really easy to tell people things about single payer and make them like it more or like it less. So I think we’re not really decided right now, and I think that’s why Democrats are kind of seizing on it. They feel like they can really take this message and run with it in the middle of this repeal debate that Republicans have been having.

Ryssdal: Right. One more thing before I let you go. The Sanders plan is not the only plan introduced and announced today. There’s another thing that’s now formally on the table. It is, I think Vox has called it, the last health care reform plan standing, Cassidy-Graham. What is it and what does it do?

Kliff: Yes, this is kind of the last Republican repeal plan that’s hanging around. It would essentially take all the money in the Affordable Care Act, the marketplaces, the Medicaid expansion, divvy it up among the states and say, “You know, you use this how you see fit.” And it would really advantage states that have not expanded Medicaid, particularly a lot of Republican states. Disadvantage the big states, like California or New York that have expanded Medicaid. So, it doesn’t seem like it’s going to have enough time to get anywhere. Republicans need to wrap this up by Sept. 30, but it means the Obamacare repeal debate, it is not officially over as long as this one last option is hanging out there.