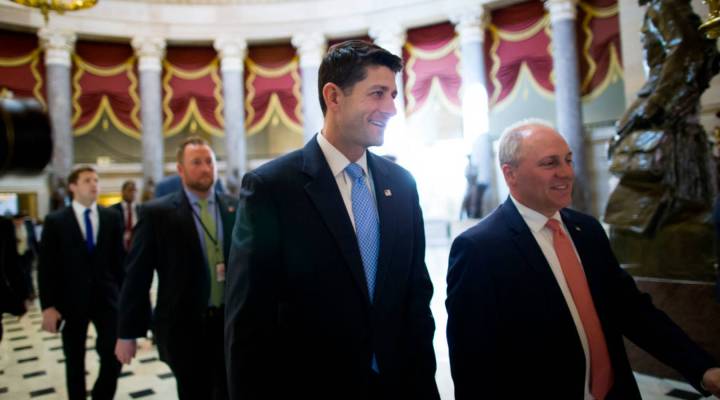 By just a handful of votes, a bill repealing parts of Obamacare and replacing it with a Republican plan passed through the House of Representatives on Thursday. No Democrats voted for the bill, which was approved in a 217-213 vote.

Before landing on President Trump’s desk, the bill will have to be approved by the Senate. The bill is expected to face some resistance there despite the fact that the both chambers of Congress have Republican majorities.

Trump, who spoke from the Rose Garden flanked by the Republican leaders, said that he was confident that the bill would pass the Senate.

“It’s going to be an incredible victory when we get it through the Senate,” he said.

About 20 million Americans gained health insurance under the Affordable Care Act, Obamacare’s official name. Since it was passed in 2010, Republicans have repeatedly attempted to repeal it with no success. Repealing and replacing Obamacare was a cornerstone of Trump’s presidential campaign.

His administration has attempted to repeal Obamacare during Trump’s first 100 days in office. The GOP replacement bill introduced in March was expected to lead to 24 million more uninsured people by 2026, according to the Congressional Budget Office. The bill that passed today has been amended since that analysis, but the CBO did not have a chance to release a new analysis on the revised bill’s possible impact before the House vote.

On Wednesday, White House Press Secretary Sean Spicer said that there were “so many variables that are unknown” that it was “almost impossible” to accurately determine the impact of the new replacement bill.

Senate Majority Leader Mitch McConnell said the Senate will vote on the replacement bill after the CBO releases its new analysis. In a statement issued immediately after the House vote, McConnell called the vote “an important step” and congratulated House Speaker Paul Ryan on getting the bill through.

Thursday’s vote was a victory for Ryan, who has already tried twice this year to shepherd a replacement bill through the House.

“Obamacare has failed. Less choice and higher premiums. A return to patient-centered health care is long overdue,” Ryan tweeted as the House voted on the bill. “We can continue with the status quo, or we can put Obamacare behind us. Let’s end this failed experiment.”