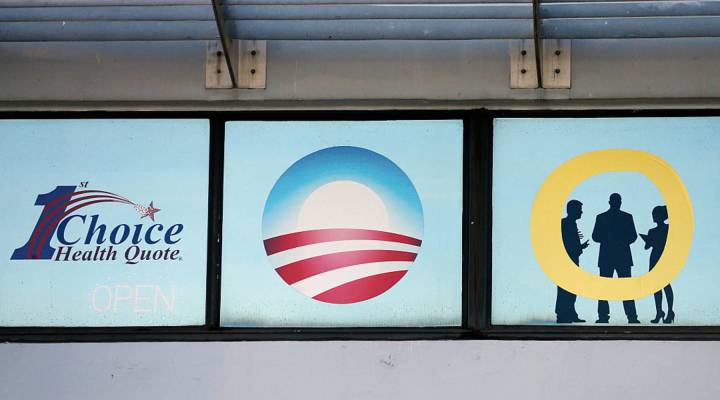 COPY
An Obamacare logo is shown on a clinic in Miami, Florida on January 10, 2017. As President-elect Donald Trump's administration prepares to take over Washington, they have made it clear that overturning and replacing the Affordable Care Act is a priority. RHONA WISE/AFP/Getty Images

An Obamacare logo is shown on a clinic in Miami, Florida on January 10, 2017. As President-elect Donald Trump's administration prepares to take over Washington, they have made it clear that overturning and replacing the Affordable Care Act is a priority. RHONA WISE/AFP/Getty Images
Listen Now

President-elect Donald Trump got a little more specific today on what’s next for health care in his press conference. The Senate is already moving forward on plans to repeal Obamacare, but that has always been the easy part. The real challenge will be coming up with something new — the Republicans have not united around a plan yet.

To get a sense of what comes next, Marketplace host Kai Ryssdal checked in with Marketplace’s health care reporter Dan Gorenstein. Below is a transcript that was edited for clarity and brevity.

Dan Gorenstein: First, we should be looking for when Representative Tom Price has his hearings. We’re not sure, there’s no formal date yet. That’s a process that could take weeks. That’s the first piece. I think what’s going to happen sooner than that though, Kai, is we’re going to see the Senate and the House start to move. They are going to be moving on what’s called a reconciliation bill. That’s a bill that has to relate to the federal budget in some way or another. So, you can’t get all the pieces that the Republicans are going to want to get in there, but they’re going to be able to get some pieces in. That process is already underway. It’s going to keep moving forward. And at the same time you’ve got a handful about five Republican senators who are really calling for some patience here. So what we should expect, Kai, is time.

Kai Ryssdal: The key point about reconciliation though is that it’s not filibusterable, right? So it’s 50 votes and they’re out the door on that one. What do you think — and we should say here that Speaker Ryan and President-elect Trump have been light on the details — what do you think is going to be in the replace part of this proposition?

Gorenstein: Right. I think what we’re going to see is there’s been so much talk about kind of government overreach from Republicans since Obamacare took effect. So, I think they’re really looking at targeting getting rid of this individual mandate where people have to have insurance or otherwise face a penalty. I think that there’s a real push to change how the federal government gives people subsidies to help buy insurance. Right now, people are eligible for subsidies depending on your income. Republicans want to do that based on your age so anyone from age 18 to 65, whether that’s the guy living under a bridge or Bill Gates, they’re going to be able to get some federal help buying insurance. I think that’s going to be part of it. Then I think there’s going to be probably some other pieces here, Kai, that really sort of just get in the weeds.

Ryssdal: Spitball it for me then, Dan. In a year, what does the Affordable Care Act as we know it today look like?

Gorenstein: So I think there are going to be some changes but I think before I even get into the details, I think we need to make it clear, Kai — and this is something you and I have talked about before. Most people don’t get insurance from the individual market, and that’s kind of where a lot of Obamacare is faced. Lots of us get our insurance, like you and me, we get it from our employers. So for most of us, we’re not going to see any direct impact. But for people who are buying care on the exchanges, eventually they’re going to probably have a different kind of plan. It’s probably going to have a higher deductible, they’re going to probably have more money that they’ve got to pay out of pocket. That seems to be the direction that the Republicans are headed.