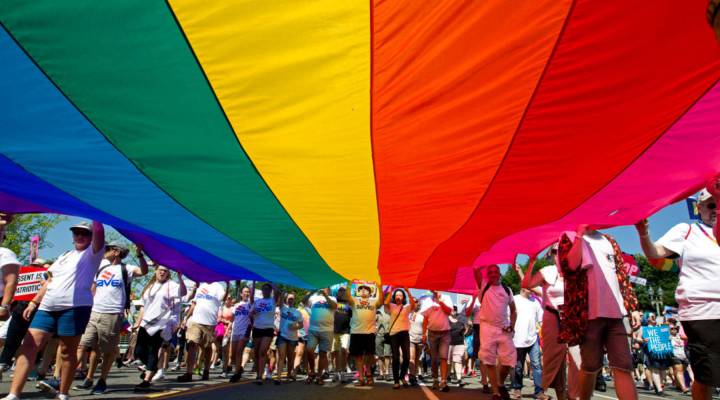 There is a chance that could change, though. A lesbian security guard named Jameka Evans filed a lawsuit, saying she was harassed at work based on her sexual orientation, which a federal court dismissed. Now the nonprofit advocacy group, Lambda Legal Defense Fund, has filed an appeal that could make its way to the Supreme Court.

Gillian Thomas, a senior staff attorney with the Women’s Rights Project at the American Civil Liberties Union and author of the book “Because of Sex,” joined us to talk more about the case, as well as other similar ones making their way through the courts, and some of the interpretations behind the law.

David Brancaccio: So an important case, regarding discrimination and what the law says when it comes to sexual orientation, could now go to the Supreme Court.

Gillian Thomas: That’s right. The Lambda Legal Defense Fund has filed an appeal of a case from the 11th Circuit Court of Appeals, which came out of Georgia on behalf of a female security guard — a lesbian who was harassed and eventually left her employment. And the 11th Circuit ruled that sexual orientation is not covered under Title VII’s provision barring discrimination because of sex. So sexual orientation is not the same as sex, said the 11th Circuit, and Lambda has asked the Supreme Court to review it.

David Brancaccio: This is a security guard at a hospital who says she was super hassled?

Thomas: Yes, she is out as a lesbian and also presented, in her own words, in a more masculine way. She wore men’s shoes, a short haircut, and says she was harassed by a supervisor on the basis of both her appearance but also her sexual orientation.

Brancaccio: All right, so there’s the security guard case from Georgia, but that’s not the only big case.

Thomas: That’s right. So while this petition is pending with the Supreme Court, there’s still activity going on around the country. There was a Seventh Circuit ruling back in April that came out in favor of coverage of sexual orientation under Title VII. And then next week, the Second Circuit — which covers Connecticut, New York and Vermont — is going to hear the question as well. And it’s going to be an en banc hearing, meaning that all of the judges on the court — not just a three-judge panel — will be hearing the question. So if that decision comes out the same way as the Seventh Circuit, that could create pressure on the court to acknowledge that the tide is turning around the country with respect to this issue.

Brancaccio: And this other case is the skydiver case?

Thomas: Yes, Donald Zarda was a skydiver out on Long Island, and was fired after he did a jump with some clients where he was strapped to a female client. Skydivers have to be tied quite closely to the client that they’re going to be jumping with for the sake of safety. And so to reassure the female client, Mr. Zarda told her, “Don’t worry, I’m gay.” And he was out at work. People knew this. But she objected to his telling her this, and said he made her uncomfortable in saying so and also, she says, in other ways with respect to his behavior. And so he was fired for that. He sadly passed away in a skydiving accident after he had initiated his case with the EEOC, and so his family has carried on the litigation.

Brancaccio: All right, so we’ll see if it actually gets to the Supreme Court. That hasn’t been decided yet. But you do have the Equal Employment Opportunity Commission itself thinking that discrimination against gay and lesbian people is discrimination, and therefore illegal.

Thomas: That’s right. The Equal Employment Opportunity Commission was created at the same time that Title VII of the ’64 Civil Rights Act was enacted. And it’s the federal agency that interprets and enforces Title VII. They were invited to submit a brief, because they have previously come out in favor of sexual orientation being covered by Title VII. Unfortunately, at least from our standpoint at the ACLU, unbidden, the Department of Justice filed an amicus brief in that case opposing the EEOC’s position, and saying that in its view, Title VII does not cover sexual orientation, and it’s for the Congress to make that decision.

Brancaccio: Attorney General Jeff Sessions and team — they seem to have a different opinion than the EEOC.

Thomas: Their opinion is very much based on a literal reading of the history of Title VII that Congress didn’t envision coverage of gay men and lesbians and bisexuals at the time they enacted Title VII in 1964. And because Congress hasn’t acted, that’s the end of the story. The EEOC takes a more holistic view of how the sex provision has been interpreted over the years. The sex provision doesn’t say anything about sexual harassment, for instance. But courts have read that protection in, and in fact they’ve read in the protection for same sex harassment as well. The Supreme Court itself has. So the EEOC takes a more historic and also more literal, frankly, interpretation of sex discrimination in that it argues if a woman marries a man and nothing bad happens to her, but then if a woman marries a woman and is then fired, clearly it’s because of her sex that the adverse action was taken against her.

Brancaccio: So if this does get to the U.S. Supreme Court, certainly that will add a period of uncertainty.

Thomas: For sure. So the hospital has until October 11 to file its opposition to the motion for the petition for certiorari, which is what it’s called. And then at least four members of the court have to decide they want to hear the case for it to be heard. And in a way, the court hearing it  — while anxious-making for those of us who watched the issue — will provide some certainty. Ultimately, there’s a real patchwork of not just state laws surrounding sexual orientation at work, but also, as I mentioned, in the federal courts as well. And so we have a state of affairs now, which I’m sure the court will take into consideration where because of their historic same-sex marriage decision, someone could get married over the weekend, but then come in on Monday and display a wedding photo from that ceremony and be fired for it. And that doesn’t make sense.