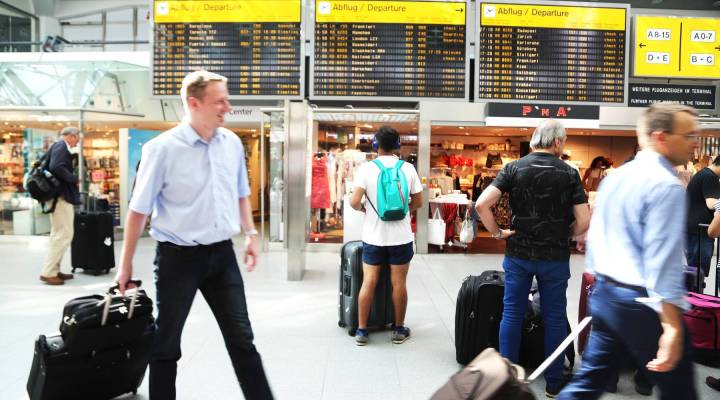 COPY
More than 21 million people a year pass through Berlin's Tegel airport. The fate of the airport could be decided by Berlin voters in an election Sept. 24.  Verónica Zaragovia/ for Marketplace

More than 21 million people a year pass through Berlin's Tegel airport. The fate of the airport could be decided by Berlin voters in an election Sept. 24.  Verónica Zaragovia/ for Marketplace
Listen Now

Germany has a national election coming up on September 24, and on the same ballot, in Berlin, voters will decide whether to keep the local Tegel airport open. Tegel sits about six miles from the city center, but opponents say it’s too old and pricey to maintain. They want a new airport currently under construction to replace Tegel.

Tegel’s hexagonal main terminal building was built in the early 1970s.  In 2012, more than 18 million passengers came through here. That number rose to more than 21 million people in 2016, who wheeled their luggage through the airport.

Kwoyila Jude-Francis waits in his taxi right outside Tegel’s baggage carousels for the next passenger who’ll spend at least €20 for a ride. Without Tegel, he’d lose a big chunk of his income.

“You are losing close to a thousand Euro in a month,” he said. “That is really a lot.”

Tegel has been slated to close for years once a new airport known as BER is finished. BER was supposed to open in 2012 but construction delays have put that off and it’s now billions of Euros over budget. The new airport is located in another state — Brandenburg — about 20 miles from Berlin’s center.

“We were overwhelmed by how many people actually said, ‘Yeah, we do need to keep Tegel,’” said Friedrich Ohnesorge, the vice chair of the Free Democratic Party’s chapter in Berlin. The party got more than enough signatures backing a referendum to keep Tegel operating, so that’s why it’s on the ballot in Berlin.

Ohnesorge says BER will be too small by the time it opens. Budget airline Ryan Air agrees and is paying for 100 billboards urging a support Tegel vote. But the opposition, which includes Berlin’s Mayor Michael Müller, wants Tegel’s space for apartments, a tech park and schools.

From his apartment near Tegel, he can hear an airplane overhead every five minutes.

Poenseler had to retire early and at age 57 he said he can’t afford to move on his meager pension. Without enough support, Tegel will eventually close, but if those who support keeping it open prevail in September, both sides are likely to be embroiled in legal battles to iron out all the details.