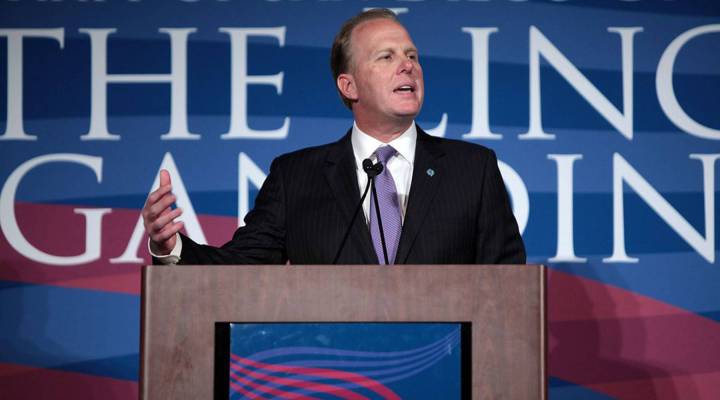 Negotiations over the North American Free Trade Agreement are currently still underway. President Donald Trump has called NAFTA “one of the worst deals ever.”  But it turns out, there are more than a few mayors in the U.S. who disagree.

That list includes Kevin Faulconer, the Republican mayor of San Diego. Kai Ryssdal spoke with Faulconer about why he disagrees with the Trump Administration on NAFTA as well as the decision to phase out DACA. Below is an edited transcript of their conversation.

Kai Ryssdal: First things first, with NAFTA re-negotiations ongoing, I want to touch base for a second on what that deal has meant to the city of San Diego both in the past and going forward. Where do you see this playing out for your city?

Kevin Faulconer: It’s been incredibly important. And when we talk about the strength of our two cities, particularly San Diego and Tijuana, we talk about it in terms of one region and the benefits that that brings to both of our cities. NAFTA has been phenomenally successful. In just a couple of quick examples: trade between Mexico and the U.S. moving through San Diego has increased threefold, about $60 billion each year alone. Our exports have grown. It’s a strength. It’s a competitive advantage and one that we’re going to fight to continue.

Ryssdal: So talk to me more about that. When you go out and you schmooze and you do that Mayor thing and you go to small businesses or companies that are dependent on this deal, what do they say to you about the prospect of this deal either being renegotiated or as the president has said, terminated?

Faulconer: Well that it’s working. And again, this is something that, you know, when we have the opportunity to tell our story, as I say if we’re not telling our story nobody else is going to tell it for us. As these negotiations are taking place in Washington I’m going to be in Washington myself with the mayor of Tijuana in a couple of weeks telling our story directly to Congress about how successful this relationship has been and how we have to ensure that we need to keep it going. Look at tweaks. Look at changes. But free trade has worked and we need to continue to promote that.

Ryssdal: If the president listens to corporate America, NAFTA will not be terminated and it will not be undone. But spitball it for me: What happens if this whole deal goes down the drain?

Ryssdal: Let me get to the, I guess, the flip side of this issue right — it’s related but different. And that is DACA and the president’s decision on that recently and what the next six months might hold if Congress doesn’t get its act together. You have said young people who came here under DACA they need quote “Legal certainty. They need to be able to contribute to the business and the economy of San Diego and this country.” What happens now?

Faulconer: Well, it is time for Congress to act. And look, the young men and women who are here under DACA, you know, many of whom have been in the only country that they have ever known. They’re students, they’re innovators, they’re business owners and veterans who enrich our country and contribute greatly to our economy and to our culture.

Ryssdal: Are you confident Congress is going to step up and get something done?

Faulconer: Well, the opportunity is there.

Ryssdal: He says, not answering the question.

Faulconer: But look, I think you know when you get down to it this isn’t a partisan issue. This is what’s the right thing that we should be doing. And I think when you look at it through those terms and through that prism, it’s not about partisan politics. It’s about doing the right thing. And so I’m actually probably more optimistic that when push comes to shove that this will get done. And I plan on being a vocal voice to help get it done.