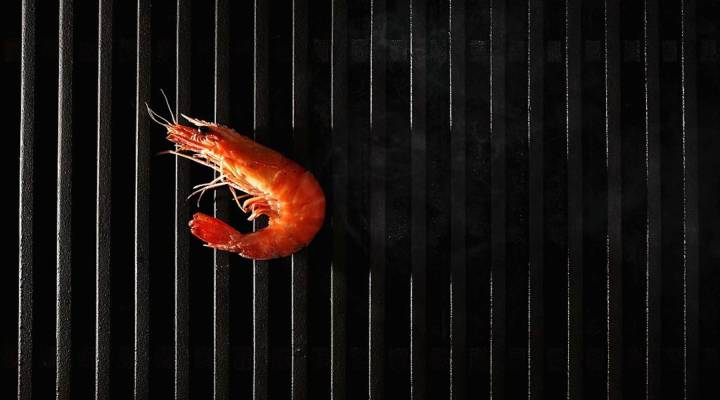 A king prawn cooks on a barbecue.  Ian Waldie/Getty Images

Why do restaurants go through the bother of only removing part of the shell from shrimp, but not from their tail?

There are a few reasons why someone might keep the tails on while cooking shrimp. Not only do the tails make the dish look good, they enhance the flavor of the dish and can be used as handles to hold the shrimp.

“Somebody who really knows what they are doing will sometimes remove them and sometimes not. It all depends on the preparation,” said Bruce Mattel, senior associate dean of culinary arts at The Culinary Institute of America. “For example, when I was a kid, my father would take us out for Chinese food and we would always get these fried fantail shrimps, Cantonese-style. They had a dramatic appearance but also you were able to hold the tail while you ate the shrimp, instead of the greasy breading. Sometimes even with a shrimp cocktail — you are eating that by hand — sometimes the tail is left on is just to facilitate eating the thing.”

For dishes that are consumed with forks or other utensils, such as pasta, stir-fry or risotto, chefs are likely to remove the tails.

There is another reason to keep the tail on a shrimp: to eat it.

Dick Stein, jazz host at KNKX and co-host of Food for Thought, said he has been eating shrimp “only since I’ve had teeth.”

“Often when I am out with someone who doesn’t know me and we have shrimp and they see me crunching down the tails, some have expressed shock. They can’t believe I am doing that,” he said, laughing. “It doesn’t seem like such of an awful thing to do. Several people have remarked on it. My family used to express shock, too. From an early age, I would just eat my way all the way down to the tail and eat that too. My two sisters and my parents never ate shrimp shells. I don’t even know why I first did it. I didn’t see any reason not to and I liked them.”

Another part of shrimp that Stein likes to eat is shrimp heads, but says they are not always offered.

“When you got to a Japanese restaurant and order raw shrimp — Ama ebi — they almost always, in any decent sushi restaurant, will fry the head up for you,” she said. “The tail comes off so that you can eat it as nigiri sushi on top of the rice but then they fry the heads up for you, which is quite a delicacy. It comes out with its eyes bugging and the antenna sticking out.”

“There’s so many different kinds of shrimp and some shrimp really lend themselves to eating the tail or even the whole shell,” she said.

Most often people eat shrimp tails when the shrimp is deep fried and the tail is crispy.

“I do most of the time,” Mattel said when asked if he eats shrimp tails.”I don’t usually do it with a boiled shrimp, but if it’s dry heat cooked and the shrimp is crisp, I will eat the tail. It’s calcium. It’s not unhealthy or dangerous. If you swallow it whole, it’d be irritating but if you chew it, it’s fine.”

Stein, Leson and Mattel all said that even if they peel the shrimp and take off the tails, they save them and freeze them.

“When I use shrimp at home or even at work, we save all the shells,” said Mattel, who has a background in seafood. At the Culinary Institute, students are taught how to use all parts of the shrimp when working with it. “We freeze them and then we make things with shells whether it’s shrimp stock or it’s a shrimp oil — where you just simmer the shells in oil and then use it for vinaigrette or a soup like  bisque.”