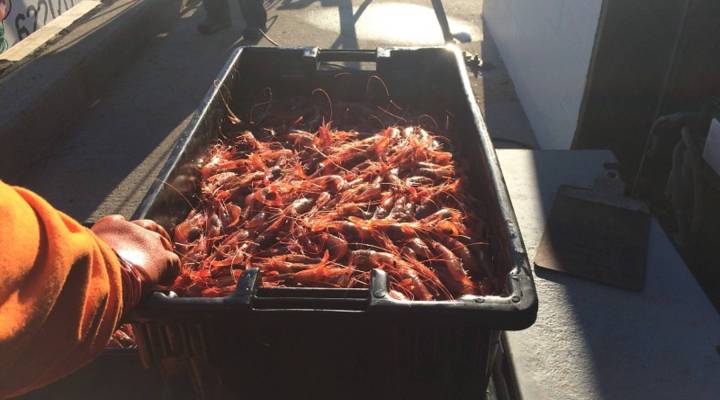 COPY
Maine shrimp are unloaded from a trawler, the De Dee Mae II, as part of a limited catch for research. Caroline Losneck

Maine shrimp are unloaded from a trawler, the De Dee Mae II, as part of a limited catch for research. Caroline Losneck
Listen Now

Coldwater shrimp, pink shrimp, Northern shrimp — call them what you will. But, whatever you call them, it has probably been a few years since you’ve enjoyed sweet Maine shrimp. A regulatory panel considers Maine shrimp stocks to be collapsed, and for the third year in a row, has shut down the fishery in an effort to give the species time to recover. But, thanks to a government program, some Maine fishermen are catching a limited amount — all in the name of science.

“There’s gonna be a battle on the auction for these things today,” said George Parr, a fish wholesaler. Parr is getting ready to buy Maine shrimp at the Portland Fish Exchange, a seafood auction in Portland. “They’re still bearing eggs, which is a good thing, because while they are still bearing eggs, they’re sweeter. Once they’ve spawned out, the meat becomes very soft and not as desirable.”

Wholesaler buyers like Parr are paying more than double what they paid last year at auction. During the last commercial shrimp season in 2013, dealers paid, on average, less than $2 a pound. This year, it’s more than $8 a pound. Today, every last shrimp gets snatched up at the auction in about five minutes.

Hours earlier, fisherman Marshall Alexander caught shrimp on his trawler, the De Dee Mae II. Alexander has been fishing commercially for more than 50 years. And even though Maine’s shrimp fishery is closed for the third straight season, he is catching shrimp, though not nearly as much as he once did.

“They want to manage by letting a certain percentage of them, make sure they spawn before we catch them,” said Alexander.

The De Dee Mae II is owned by Marshall Alexander, one of the six fishermen participating in a shrimp research project.

Alexander is one of six fishermen participating in a government research program this winter that allows a limited catch in the Gulf of Maine, which spans the entire Maine coastline. Fishermen are required to collect a few small samples each day they fish as part in the program. And — this is the part of the research that is creating quite a buzz — the fishermen are allowed to sell the part of their catch that doesn’t go to the lab.

“We wanted them to be able to catch something as compensation. So we’re paying them in shrimp, basically. So we hope that they catch enough to, you know, make the trip worthwhile for them,” said Maggie Hunter, a biologist at Maine’s Department of Marine Resources. Hunter, the resources department and other agencies are managing the study.

The total haul of shrimp from the program, which runs until early April, will only be about 6 percent of what Maine fishermen caught the last time they had a season. But according to Hunter, it is important for biologists and regulators to get data every year.

“We’re collecting the samples mainly to measure the shrimp and count how many eggs they’re carrying, and to determine the timing of the egg hatch,” Hunter said.

Before the closures, shrimp seasons lasted a lot longer. The harvests were worth $6.5 million six years ago. According to Hunter, the significance of the sampling program goes beyond just the research.

“I think it’s good to keep shrimp in the news and to keep a few on the market for some lucky people to be able to eat,” Hunter said, laughing.

Almost half of today’s catch goes to an out-of-state buyer who sells it to sushi bars in Boston and New York. But some of the catch stays closer to home. At the bustling Harbor Fish Market on Portland’s waterfront, the shrimp are in hot demand.

“It doesn’t last more than a day, even with the prices being skyrocketed,” said employee Connor Vincent.

Nearby, at Fore Street Restaurant, owner and head chef Sam Hayward hopes to score some, too.

“We love them! It’s one of those things that expresses delicious Maine seafood in the winter, when many other seafood products aren’t available to us,” Hayward said.

And customers do come in asking about Maine shrimp. Hayward said people who don’t know about the closure on the shrimp season might say: “We loved them, and we remember them, and we want them back. Are you going to be bringing them in?”

According to Hayward, his answer is always the same: “Nobody wishes we could get them more than we do. There is nothing that will really quite equal Maine shrimps’ place in our communities and on our tables.”

But even with the Maine shrimp fishery closed for the third year in a row, Maggie Hunter, Sam Hayward, George Parr and scientists are all concerned. The Gulf of Maine has been warming over the past decade, creating an inhospitable environment for the shrimp. “And they are pretty sensitive to temperature,” said Hunter.