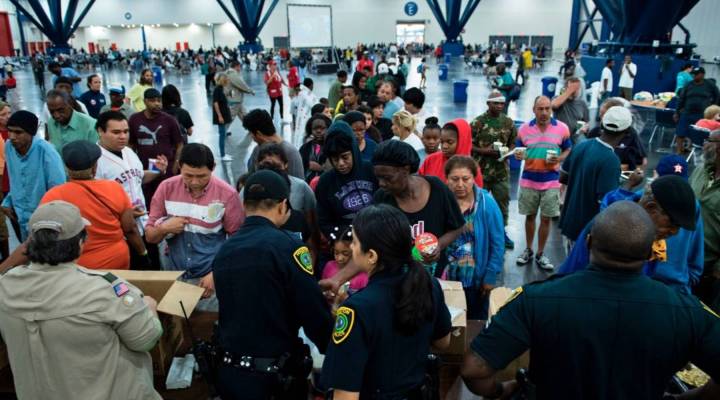 COPY
Flood victims gather for food at a shelter in the George R. Brown Convention Center during the aftermath of Hurricane Harvey today in Houston. BRENDAN SMIALOWSKI/AFP/Getty Images
Weather Economy

Flood victims gather for food at a shelter in the George R. Brown Convention Center during the aftermath of Hurricane Harvey today in Houston. BRENDAN SMIALOWSKI/AFP/Getty Images
Listen Now

Many people in Texas have been displaced by Harvey, now a tropical storm. Some left town to stay with friends and family but others have nowhere to go. Many of these folks end up in shelters.

After Hurricane Katrina, authorities used the massive Superdome in New Orleans as a shelter for more than 9,000 people. The logistical difficulties of organizing such a large shelter resulted in a breakdown of food supplies and basic hygiene facilities. The Federal Emergency Management Agency and officials in Texas have agreed they don’t want to turn any massive structures, like Houston’s Astrodome, into housing shelters. In some situations, though, that’s the best option.

Planning for disasters is difficult because there are so many different variables — population size, proximity to other major cities, places where people can safely go. The Red Cross said more than 6,000 people stayed in shelters Sunday night and the numbers are expected to fluctuate over the next week. The organization said it doesn’t worry about the size of the structure.

“If it’s a local high school gymnasium or a local YMCA, that’s where people will be placed,” said Anthony Tornetta, a Red Cross spokesperson.

Jeff Schlegelmilch, deputy director of the National Center for Disaster Preparedness at Columbia University, said even though FEMA and the Red Cross are trying to avoid large structures, often, they’re the only spot.

“In some cases these larger mega-shelters work temporarily,” Schlegelmilch said. “Because they’re the best way to shelter a lot of people very quickly and to really focus your resources.”

Tim Dixon, professor at the University of South Florida, agreed that FEMA and groups providing shelter can’t be all that choosy about where they put people, specifically in big populations centers like Houston.

“Say you have a million people, and 10 percent of them need housing, that’s 100,000 people,” Dixon said. “I don’t know of any city that could easily come up with public spaces and beds for that scale of people.”

Houston is the fourth-largest city in America at almost 2.4 million people. Craig Fugate, former director of FEMA, said small-to-medium-sized shelters are ideal, but those are tough to come by during Tropical Storm Harvey.

“You try to open those up inside the hazard area, but if you look at where the rain’s falling, that’s such a large chunk of southeast Texas that you’re really having to go far inland to find shelter capacity,” Fugate said.

For many displaced people, though, stranded by waterlogged highways and flooded streets, getting to those inland shelters is not going be easy.