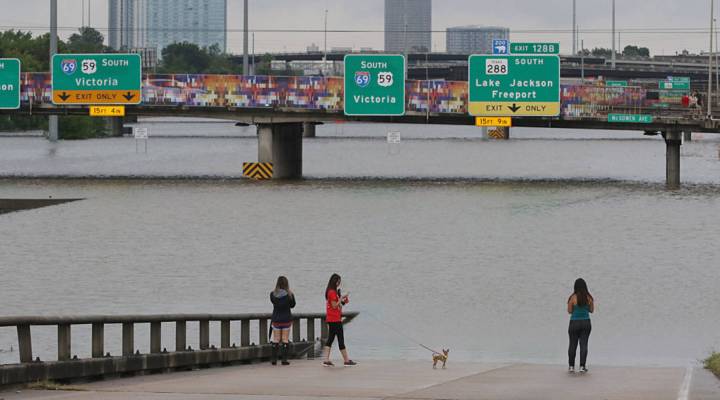 COPY
People view the flooded highways in Houston yesterday as the city battles with Harvey, downgraded to a tropical storm, and resulting floods. THOMAS B. SHEA/AFP/Getty Images
Weather Economy

People view the flooded highways in Houston yesterday as the city battles with Harvey, downgraded to a tropical storm, and resulting floods. THOMAS B. SHEA/AFP/Getty Images
Listen Now

Significant parts of Houston have been underwater at some point in the last three years: the Memorial Day floods of 2015, the Tax Day flooding of 2016 and now Hurricane Harvey, which is said to be the city’s worst flooding on record.

Last year, ProPublica, Reveal and the Texas Tribune explained how much of the damage is because of the way Houston is built. Marketplace host Kai Ryssdal spoke to Neena Satija, a reporter for the Texas Tribune and Reveal, while she was on the ground in Houston. The following is an edited transcript of their conversation.

Kai Ryssdal: First of all, you’ve been out and about today in Houston at some of the shelters. What are you seeing?

Neena Satija: The shelters are filling up. Our hotel is pretty close to one of the largest Red Cross shelters in the city. They’ve got about 3,000 people there right now. Yesterday night we were there, and they just had 1,000. So it’s filling up and they expect to be at capacity, which is 5,000, later on today. So it’s getting a little chaotic.

Ryssdal: One of the reasons we called you, besides getting a sense of what’s happening on the ground, is the piece from a year or so ago about Houston and why it is so flood prone. There is so much to unpack with this story and why Houston is having the problems it is. What’s the overall sense of what’s going on?

Satija: Yeah. What I would say is Houston has always been a flood-prone city. It’s a low-lying city, it’s near the coast, much of it was swamp land. But what’s happened over the last hundred years, and I think scientists say has accelerated in the last 20 years, is rapid unchecked development, and scientists say that that development is making the flooding even worse. The second factor that you have is climate change. Climate change, scientists say, we know is potentially causing these rainstorms to be more frequent and more severe. So you add on the climate change and the unchecked development to a city that’s already prone to flooding, and you’ve got a big problem.

Ryssdal: When you say “development,” basically it’s paving over grasslands and prairies and things that would, in theory, absorb some of the water or more of the water.

Satija: Yes, exactly, that’s exactly what’s happening. And that’s what scientists are worried about. And, you know, those prairie lands have very tall grasses. They could’ve absorbed an enormous amount of floodwater. I want to be clear here. Even with a lot more prairie land, this would have been probably a catastrophic flood. But scientists agree that, you know, had we been able to restore more of that and preserve more of that, perhaps the damage would have been less.

Ryssdal: Talk to me for a second about regulations on that development, on zoning requirements, on the types of mitigation that you’re required to do when you build in Houston. Surely, they’ve got flooding in mind.

Satija: They do certainly have flooding in mind. But I would say, you know, scientists have told us that Harris County, which is the county that surrounds Houston, has more lax regulations when it comes to building in the floodplain than some of the surrounding counties. You know, freeboard is one example. One of the other issues is a lot of folks are building in floodplains and they’re just raising their houses, which is fine, but now there’s increasing scientific evidence to show that that might actually be causing the surrounding areas to flood. Every scientist and expert that we have talked to, including some government officials, say that the regulations for building in floodplains, building in flood-prone areas in Houston, are not sufficient.

Ryssdal: Let me get you to the eventual recovery of Houston, and that part of Texas, when the water goes away. There was already a shortage of construction workers, of folks who can do the actual labor that is going to be required to rebuild Houston. What’s your guess? What’s your sense on how that’s going to go?

Satija: Yeah, you know, I just spoke with Sen. Ted Cruz at the Red Cross emergency shelter, and there’s some concern about federal resources here. I think we heard the FEMA director say earlier today this is exceeding federal capacity for a response. I spoke to a family yesterday that had evacuated from their home in Meyerland, which has seen enormous amount of flooding. And they told me they tried calling 911, they tried calling 311. Nobody ever answered, they couldn’t ever get through. And they ended up getting rescued by a private citizen in a boat, taken to a grocery store, then they hitched a ride with another volunteer to another pickup center, then they hitched a ride with another volunteer to the Red Cross shelter. So at no point was the government involved in their rescue.